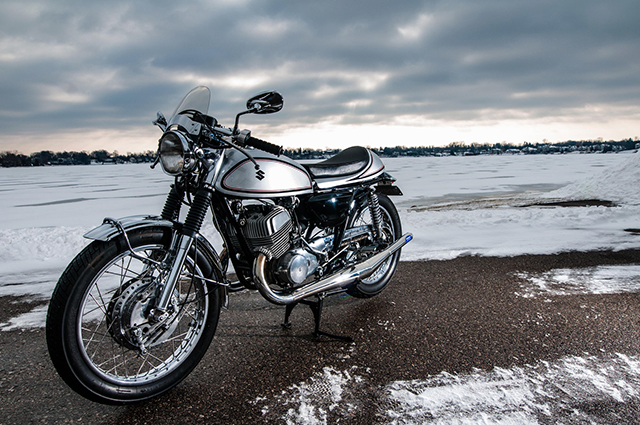 Martin is the newest member to the Pipeburn team. When Martin isn’t writing for numerous motorcycle and automotive magazines, he can be found either running his auto parts import business or in his workshop building café racers from bikes that usually have one wheel well and truly in the grave.

It was the era of the wild 2-strokes, from the mid-Sixties to the mid-Seventies; if speed was your thing then you couldn’t beat a screaming oil burner. But Suzuki took a slightly different approach, they combined what they’d learnt at the race track and produced a bike that was bullet fast but also reliable, the perfect street 2-stroke motorcycle, the classic Suzuki T500 Titan. Ralph Spencer had himself a gorgeous original example and motorcycle nirvana was his until… All bikers have experienced it, you stop for a red light at the front of the queue, nobody behind you and then comes that sound. The sound of a car getting closer and closer and it doesn’t appear to be slowing down. 99% of the time that car stops, sometimes far too close for comfort, we look around to see they’ve stopped less than a metre short of our back wheel. Ralph Spencer was the 1% and his mint condition T500 had its rare and immaculate rear fender CRUNCHED! That was all the incentive Ralph, proprietor of Shoemaker Vintage Moto, needed to set about turning the classic old T500 into an award winning, show topping, classic café machine that was still a treat to ride on the road. Aside from the Titan Performance polished stainless expansion chambers the engine remains relatively standard, this doesn’t mean its short on power. The torquey 2 stroke parallel twin was capable of pulling the ton straight from the factory in 1971. With that sort of power pushing you around Ralph made the wise decision of switching to a Suzuki GT750 4-Leading Shoe front brake. To give it that genuine café racer riding position Ralph bolted on a set of Raask rearsets integrated with his own Shoemaker Vintage Moto custom mounts and links, ditched the factory bars in favour of Tommaselli adjustable clubman bars and for that final café touch added a National Cycle “Flyscreen” shield. All perfect for getting Ralph tucked in and in full control as that sweet sounding two stroke fires him down the road. Wanting the classic look the Suzuki was fitted with an Omar’s wide cafe seat, that victim of the red light carnage the original rear fender, was bobbed and an LED tail light fitted to really catch the attention of the four wheeled terrors. The custom paint by Jim Gilbert is a tribute to the mighty Manx Norton and gives the T500 both an immaculate classic racer look and also its name, “Manx Titan” Son and bike photographer Vaughn is understandably proud of his old man “He is an avid Suzuki fan. During my childhood and early adult years he’s had 30+ bikes, more than half of them being Suzuki’s. He currently produces fully integrated parts for the T500’s” And as if the pictures and son’s testimony don’t convince you of just how good a job Ralph’s done, winning Best Japanese Machine at Mods vs. Rockers Cleveland 2012 and best 2-Stroke at Ton-Up Ypsi (Michigan) 2013 is further proof and just reward for a build that focusses on doing just enough to personalise without losing any of that original T500 Titan flair.