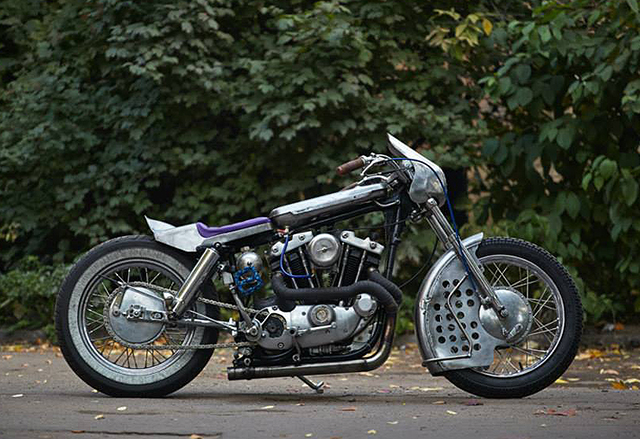 Most custom bikes are meticulously thought out for months before a spanner is turned or an oxy torch is lit. Parts will be carefully considered and increasingly often many late nights will be spent in front of Photoshop tweaking the colours and lines of a build before any action is taken. Moscow-based Elkabikes bucked this trend by producing this 1972 Harley-Davidson XLH in under a month using parts they begged, borrowed, scrounged or purchased from Ikea. That’s right – Ikea. It’s not a bobber or a café racer – it’s a Harley-Davidson Flat Packer. The story behind this tatterdemalion oddity is a testament to the small Russian workshop’s love of improvisation, raw metal and quite possibly, vodka. Elkabikes heard about an upcoming motorcycle show and much like anyone with a fast-approaching deadline – a student, journalist or motorcycle blogger (ahem) they placed the project to one side and went about working on their other more pressing projects – chiefly the stripped-back bicycles the team also build. Things with the Harley only really kicked into gear a month before the show started – when they began sourcing parts and putting the bike together with no budget, no clear plans and plenty of gusto. Aleksey Gurbanov from Elkabikes said that the fuel tank was the first item to make its way onto the bike. The distinctive narrow tank was sourced from a local flea market and the raw, stripped-back finish dictated the direction of the rest of the build. From there the seat was fabricated and upholstered in a striking purple, giving the bike its basic lines. And then… well, that’s where things get interesting.

The resourcefulness Aleksey Gurbanov and his team employed on this old XLH is impressive. The exhaust was welded together from scraps donated by another motorcycle workshop and the handlebars were made from Kawasaki and Harley Davidson parts. The air filter cover? Two dog bowls held together by an old bicycle nut. The oil tank is a modified toilet brush holder. The rear light was purchased from Ikea and the white globe was swapped out for a red one. Really. The engine itself required a bit of work, thankfully devoid of toiletries or camshafts fashioned from a skårsgardflöglet bedhead. On inspection the stock Bendix Zenith carbs were totally ruined and had to be thrown out, to be replaced by a new S&S Super E. At the same time all the gaskets were changed and the starter motor was removed. (Remarkably, Harley have had ‘electric legs’ on their Sportster series since the late 1960’s – and who said they weren’t innovators? That’s right, everyone. But once upon a time the Sportster was a comparatively light, spritely model with a few innovative features). The last three days of the build resembled something out of an American reality TV show, with the team working well into the night to prepare the bike for its debut. After a cantankerous startup, with the old Ironhead belching oil all over the workshop floor, the bike finally started and was ridden to the show the morning it opened. And judging by the size of that fuel tank, I’m guessing it the show wasn’t too far away. Elkabike have crafted together a truly unique take on the venerable Sportster that will certainly create heated discussion among Pipeburn readers. With it’s 70’s-esque purple seat and the raw metal… well, everything – I think it looks terrific. But if you baulk at the sight of an early 70’s XLH with a toilet brush holder oil tank and a student’s desk lamp for a stop light, take heed – the frame has been left standard and one day, if the owner chooses, it can be returned to its former glory. But in the meantime I’m glad the guys from Elkabike turned their hand to this old piece of American iron – dog bowls and all.