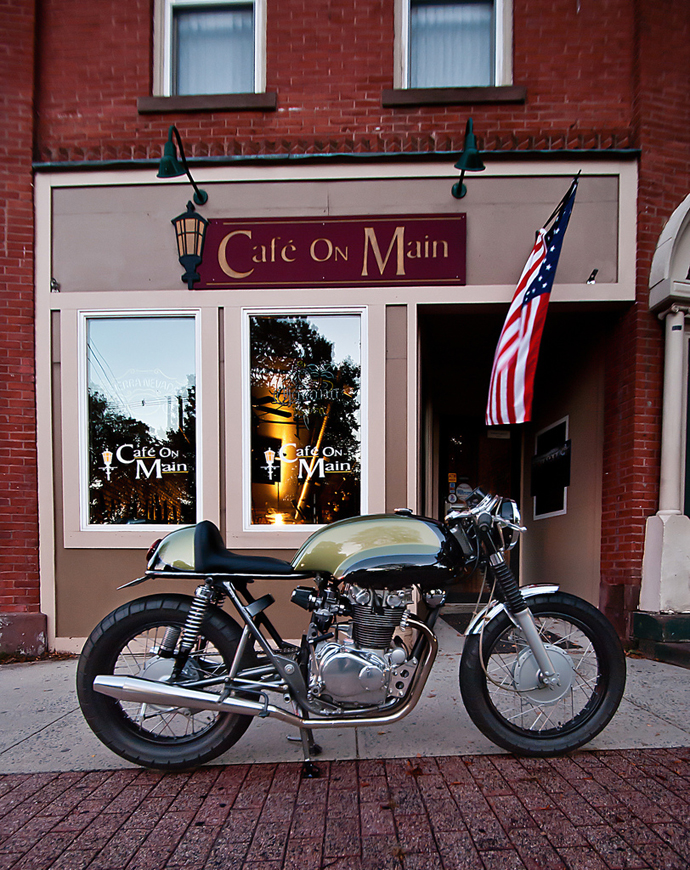 We were recently accused of featuring too many Honda CB’s on Pipeburn. So when I received this CB450 from Benjie Flipprboi at BCR, I had to think twice about posting it. After about 10 seconds of thinking… I decided it was too nice not to feature. The bike was painstakingly built over an 18 month period by one of Benjies good customers Kevin Dinsmoor – using a lot of BCR products. The unique shaped tank is a BCR Hammer Head and one of my favourite tanks on the market. The cafe seat is also from the talented Mr Flipprboi and both tank and seat have been painted in an old Toyota Corolla green from the 70’s with anthrecite pin stripe. “It took a while to choose” says Joe. “I don’t have photoshop so it took days to settle on a stripe pattern and three rolls of tape.” This is how Kevin describes the project:

The wheels were coated semi-black and sent to Buchanan’s for new stainless spokes and lacing. I used a front drum from a 1970 CL450 I had – loved the look. Forks rebuilt, tapered stem bearings. Engine was a complete tear down and rebuild +3 over bore. Polished everything possible. Homemade rear sets (BCR style), pegs machined stainless. BCR bars with 450 gauge. LED bolts in tree for neutral & hi beams. Stock handlebar mount holes filled and poished. New vintage switches for bars without kill switch. LED bolts for turn signals, drilled out headlamp mounting bolts and threaded in the signal led’s. BCR head light brackets. Powdercoated upper shock tubes. Sectioned stock headlight ears to use for gator upper mounting. Hondaman electronic ignition. BCR velocity stacks. CB900F rear shocks, disassembled and polished. Nickel plated chain. Rear set frame mounts custom made, lowered and moved back. BCR stainless pea shooter exhaust (my neighbors hate me now). The biggest pain in the butt was the rear swing arm. It is 3″ extended. The stock one just looks too short. So I made it longer. Then the shocks (the longest shocks with fork bottom) were too short, so I sectioned the shock mount off a CB550 swing arm and grafted it onto my arm. Then the center stand was too short for the new ride height, so again I sectioned two center stands together for the height while keeping it tight to the exhaust so it still looks cool when it’s up. The bike took 1.5 yrs to build and three CB450 bikes and a few CB550 parts.

Apart from his neighbours hating him for that peashooter exhaust, I think most people (including myself) will love this classy CB450 café racer. For more pics you can visit Kevins Flickr page.