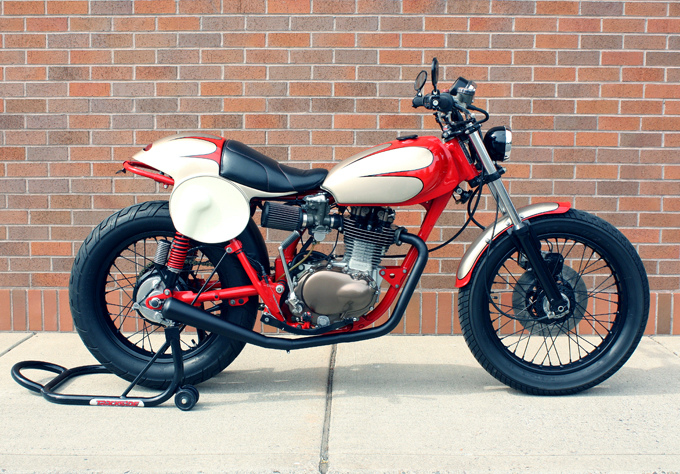 Larry Pearson is no newcomer to the pages of Pipeburn. First we featured his beautiful CB550, then his Wes Cooley GS1000S (which is about to appear in Cycle World) and now this striking Honda XL250. “A co-worker of mine had this dilapidated ’72 Honda XL250 that he used as a woods bike for 20 years” said Larry. “He stripped it down, put a set of knobby tires on it and just rode it occasionally. It had been bored out to a 305cc and a mild cam installed by a previous owner.” For whatever reason it sat outside for about 5 years unused, until it was offered to Larry for free – just to see if he could do something with it. “I didn’t really have any need for a dirt bike, but when he told me about the engine and how well it ran, I went over for a look. Even after sitting outside for all those years, and with bad gas in the tank, it fired right up after about 5 kicks!.” Larry decided to haul it home. It was in terrible shape, with rust everywhere, dented tank, broken fenders, bent exhaust and anything else you can think of. Wondering what to do, Larry came up with the idea to make a retro motard.

First thing Larry did was get the XL250 in mechanical order. “All the engine really needed was a new head gasket and a complete tune and service” recalls Larry. “I also went through the carb. All the seals and bearings were replaced in the frame, and a mid 70’s Honda CB500 front end sourced on eBay. With minor modification to the steering head, it bolted right on, lowering the front of the bike 3 inches… perfect. I also wanted a disk brake. The exhaust was hand made from an ’83 Honda CB1100F header pipe as a starting point with an old rusty aftermarket muffler that I cut up, sandblasted, installed a baffle in, and then bent to fit. When it came time for the body pieces, everything stock XL was tossed except the gas tank. I bought a shell of a fiberglass tail section for a Matchless from Airtech, then proceeded to make it fit the XL frame. Blisters were formed to fit over the Honda CR250 rear shocks, the seat pan was extended three inches to meet the tank, and a hole was formed and shaped to accept a cut-down Huyabusa tail light assembly. The front fender is the stock Honda CB500 fender, sectioned 6 inches and welded back together again then sandblasted and painted. The wheels are stock Honda. The rear is the XL’s 18″ and the front is the CB’s 19″, sandblasted and painted satin black.” Larry’s business is Meticulous Motorcycle Painting, so when it was time to paint he wanted to show some of his skills. “I love scallop paint, and I thought that would look cool on this bike, so that’s what I did. It’s champagne with red scallops, pin striped in black. The engine was carefully sanded and prepped then painted. The seat was shaped starting with the stock XL foam. It’s a love it or hate it sorta thing, but I wanted it to flow with the lines of the tank and tail section.”

The bike was built on and off by Larry over the course of 2 years – and he is obviously proud of his creation. “I love the way it turned out, and it’s a total blast to ride! Can’t weigh much more than 250 lbs, handles great, tons of torque, and stops on a dime with the disk brake. I’ve seen people at shows walk right by $60,000 choppers to get to the XL… that feels good.”