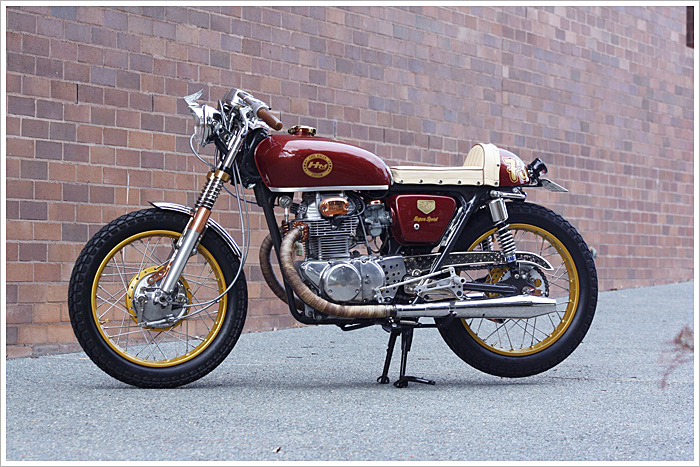 When it comes to motorcycles, $300 doesn’t get you much these days – especially down here in Australia. For 300 clams you’re lucky to get a set of new tires. But sometimes you get lucky. When I say “you” I’m referring to Simon Whittaker who managed to buy two old ‘70s Honda CB 250s for the princely sum of $300 for the pair. He is probably going to hell for pretty much stealing them off an old lady, but looking at the finished project I think it might be worth it (not that Pipeburn condones anyone stealing motorbikes off old ladies, old men is fine). Anyway, meet the very sweet little café racer they call Brown Sugar… The bikes were found with a little old lady in a small Australian town called Nowra. When Simon discovered them they had been sitting in her garden shed for a number of years and one was complete with engine while the other one was in boxes. “I think she had a few tears in her eyes as we left realising I practically stole them off her” says Simon. As soon as Simon got back to his garage he started tinkering with his new purchase. “After a sort through of all the usable bits and rigging up carbs, header pipes, a battery and fuel I had the motor of the frame/engine combo idling away loudly in my garage” says Simon. “I then pulled it all apart and started the transformation.” “The metallic brown paint was a close match to a Bell helmet I already had but I got the boys down at Edwards Spray South in Tuggeranong to add some gold metalflake I had left over from another project and they did a fantastic job in 2pak”. I spent a lot of time ordering parts of the net such as the GP60 seat from Tumbi glass, rearsets from Motobitz, grips, bars, cables, headlight, rear light etc from Ebay. A set of new Hogan “silencers” from a Harley were grabbed off a table at the local swap meet for $80.00 and easily modified to fit the little Honda which now sounds like slightly muffled open headers. “Craig Crawford out at C&D Metal in Queanbeyan let me use his workshop once again to modify the rear frame with a hoop I bent myself and make mounts for the seat and rear tail light bracket and “Frog”, welded it up” . I also trimmed the front guard and cut down an old rear one for under the seat and dropped the battery box down for clearance”. Once all the fabrication was sorted Simon took the frame, rims and hubs over to “Chop” Harris and Luke at Mobile Fabrications also in QBN for powder coating. I didn’t want another black frame so I went with a dark gunmetal colour and agonised over the wheel colour. I already had the seat stitched up by Johnno’s seats in cream and brown stitching so I was originally thinking cream rims & hubs, but there was gold flake in the paint so I thought would metallic gold work too?”, As you can see Simon went with the gold….. “Then I sent the finished wheels to Darryl at Moose racing who laced them up with thicker heavy duty stainless spokes and put a set of Hagon short shocks into the order too”. A set of old style Dunlops finished off the wheels…..“I got in contact with Steve at JNT performance in Albion Park after seeing some of his aluminium spun work on a Deus build off bike and I sent him a speedo so he could spin up a cover for that and the tach from alloy. Which he did perfectly”. Everything was back together after a few months and many hours of detailing the engine and lots of polishing and waiting for the post to arrive, Craig Helmers at Choice signs (who fortunately managed to find a vinyl that was a dead match to the wheels) designed the decals that are on all of Simons bikes. Electroplating technology took care of the nickle and copper plating that adorns various parts over the bike, and a workmate of Simons, Alex Gibbs “who happens to own a lathe” made the brass retainers for the nickle plated front external springs. “It turned out well I think, goes good for a little 250, easy to ride and reasonably comfortable too.” And you should hear it just around midnight…