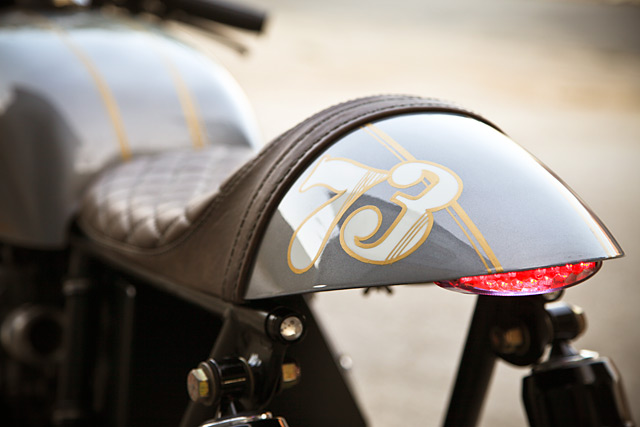 We all find our way to motorcycles in different ways, for the vast bulk who throw their leg over the two wheeled contraptions it is purely about cheap transport and nothing more. But for the early customisers who had returned from the Second World War to today’s feature bike builder there was a therapeutic aspect to both the riding and the building of their creations. When Tyson lost his parents he needed to find his own form of therapy and picked up a nice Buell to take to the streets. But riding alone just wasn’t doing it, with ideas swirling in his head and wanting to experience the meditative state of spinning spanners he picked up a sweet running 1973 CB750 and his true motorcycle journey began. For a first time builder without the assistance of experienced veterans of the game around him Tyson made the smart decision to buy a bike with solid running gear. Knowing he had a great runner he took the bike to a friend’s garage where it could be torn down in anticipation of the addition of modern suspension and vastly improved aesthetics. Ripping apart a motorcycle is therapeutic in and of itself, but there is also a great deal of education in unpacking a functional machine and seeing just how all the components work. One thing that was clear to Tyson was 30 year old wiring wasn’t what he needed so the bike has been completely rewired for reliability and the frame de-tabbed for a tidy finish. Having cleaned up the frame and been inspired by builds from the likes of Cognito Moto, Tyson opted to scrap the standard front end and go for a GSXR set of forks and components. It’s a conversion that makes sense, when the CB came out it was the market leading sportsbike and for the period GSXR front ends are chosen from they too were winning bike of the year awards all over the world. USD forks allow for a lower ride while substantially improving the handling ability – not to mention looking cool as hell. They also offer a supreme upgrade in braking performance with their plate size twin discs being clamped by Tokico 4 piston calipers. Being a 1973 model Tyson’s CB750 comes standard with an edge welded swingarm that is strong but looks a little clunky, so in its place a tubular item from a CB550 has been given the job. It was in this guise that Tyson racked up over a 1000 miles in the course of just a few months, enjoying all the benefits of ripping up the streets on a bike you’ve built yourself. But with a vision for how his CB750 could look and having enjoyed the process of the initial build the bike was brought inside for a new makeover. Once again it was torn down to the bare frame, that’s the beauty of enjoying the build process and the therapeutic nature that comes with it, there is no fear in going the extra mile. With the bike in pieces the essentials were sent off for powder coat for a durable finish capable of withstanding plenty of hours on the roads without chipping away. The seat was then swapped over to an item that fitted the theme Tyson was going for, a beautiful leather piece from the guys at Tuffside. Enjoying the visual juxtaposition of the old and new Tyson left much of the engine the way it came to him when it was purchased. While the covers have been painted the barrels show their age and the life they’ve led on the streets and it’s this decision that hints at the Hot Rod Café Racer that was inside Tyson’s mind that would eventually become the finished item. The carbs feature some beautiful raw metal velocity stacks to improve air flow while the exhaust is a heat wrapped 4 into 1 system that finishes with a baffled straight pipe in a frame matching black finish. The wheel and tire choice is more than a little hot rod, relaced rims are wrapped in beefy rubber not only at the rear but equally sizeable chunks at the front. Arguably one of the best looking tanks to come out of Japan, the K3 item is now resplendent in silver with gold period Honda logos to match. Setting off the metal tones are white graphics on the tank with the rear hump of the seat now sporting a white with gold striped “73” logo. Just below the logo the frame has been cut to neaten up the rear end, allowing no overhang past the shock mounts, with the final choice being progressive sprung items featuring chrome springs. In the tradition of both café racers and Hot Rods the instruments are kept to a minimum for a clean and functional look, a small chrome speedo and even smaller tacho provide the vitals. While the triple tree mounted idiot lights sit on a prison made hand tooled leather piece. The single bucket headlight lights the way not only for the CB but the new journey in Tyson’s life. In the end it’s become more than just the therapy he needed after such a huge loss, motorcycles have become a lifelong passion for Tyson and having proven he can build a real beauty he’s now twisting the throttle so this Honda 750 can soak up the miles – 3000 to be exact and counting.