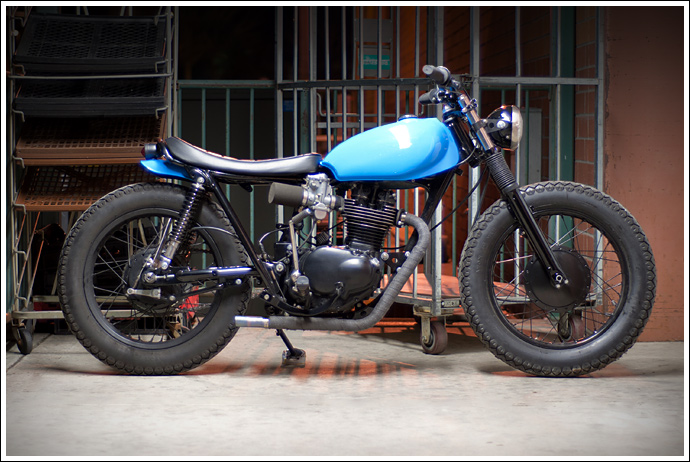 Short of cash after the build, Jake was forced to send the XL out to work in a bakery

Finding and showing the world great custom bikes. It’s what Pipeburn does. But being at the pointy end of the whole process with it’s constant search for the latest and greatest can easily make you forget about the other amazing part of the process – the part where all you guys arrive and check out the cool bikes. Now here’s the really cool part of the whole process; like some crazy custom bike feedback loop the bikes we find and feature then go on to inspire the new builds to a greater or lesser extent. Like the simple, clean, elegant Honda you see here. Except in the case of Jake Lyons and his XL it was a little more, shall we say, direct than usual. See Jake went from nothing to knee deep in grease and Shoichiro design after his first ever session of Pipeburning. So if you’ll allow us a brief moment of pride, please enjoy the bike that Pipeburn built. “I’m Jake Lyons – a Washington contactor and bike fan. While on a job site a couple years ago I began to speak with an electrician about motorcycles. Prior to this conversation I had zero awareness of any sort of vintage scene, I had only owned enduros and newer sport bikes. He insisted that I take a look at your site; arriving home that day I pulled up Pipeburn and after about 6 hours and 60+ pages later the decision was clear – I would be building a bike. I already had a sentimental old XL sitting in my shop and I began work immediately.” “This XL 250 was in fact the first motorcycle I had ever ridden and learned to ride on back in 4th grade. My dad picked it up in the late 70’s and dragged it around the states, beating it up along the way. In late 2008, it had nearly 40 years of abuse when I pried it from under some old lawn chairs below his deck. He made me complete various tasks, including climbing and pruning cedar trees before I could have the title but I was rewarded with this 4-valve, rusty matriarch of a machine.

After getting it home I put new tires on it and drove it once before the kick starter snapped off inside the case while up in the mountains. After nervously compression starting it and getting it home, it sat for over 2 years until my eyes were opened to Pipeburn. I started the project in mid July 2010.” Won’t somebody spare a thought for the poor tuna cans…

“I started with a complete tear down. I stripped most of the excess tabs off the frame, welded in a hoop and sent that and the swing arm off to powder coating. I do all of my own work and put the majority of other components into primer, wet sanded, and then base/clear black. The tank was beat by my father and took some effort to straighten out; the blue paint being a 40’s Ford truck code. The motor was rebuilt with the JE 285 kit in trade for a parts bike I had bought for it. The seat I built using a piece of steel I yanked out of the bin at a recycling place and then plasma cut it out after making a cardboard template. I then used some neoprene foam and a steak knife to get the shape I wanted. I had all of the paint and body work supplies from my car projects. The bike fit perfectly in my shop and just came together really smoothly.

Being my first bike, each decision took at least 10 times as long to make as the actual building took. I got the bike into a roller within a month and then took an additional year to really finish it, working in the evenings. The 13 year-old across the street, Harrison, usually helps me with projects and this was no different. He was a huge help and came over to work pretty much any time my garage door was open.” “After a battle fitting the front CB 18″ wheel I got for free, using a CB 360t front end and some pro bono millwork by my friend Mike, I finally fitted the 4:00×18 Avons I had been drooling over. I had it dyno tuned a couple of times before the bugs were worked out for the 285 kit but now it first kicks and runs super strong. It even picks up the front end into second, which was not quite an option before the build.

I’m completely addicted to these classics now and have several other projects in varying degrees of completion. A 1968 Yamaha YCS1, a 1974 Honda CB550SS, and a 1981 Honda CB750k. I love the energy of these bikes, they have a distinct soul in comparison to their modern day successors.” So there you have it. And do we feel like proud new fathers of a beautiful, bouncing baby bike. Scott’s just lit the stogie and I’m on my third glass of single malt. Jake, the mother in this case, is doing well though he’s obviously a bit tired and definitely needs his rest. Quiet now – you don’t want to wake her…