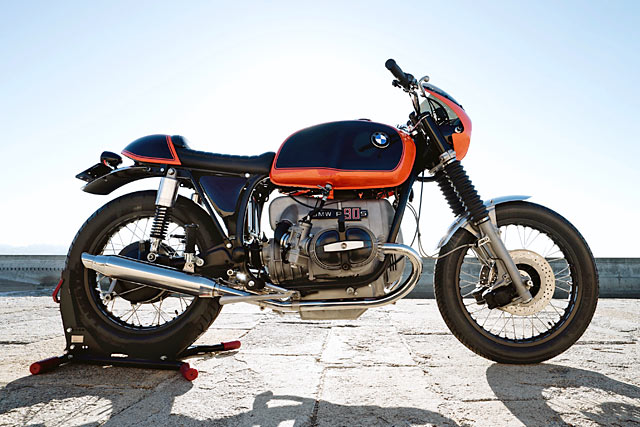 For those ‘of a certain age’, BMW’s mid-Seventies R90S will be fondly remembered as the bedroom wall bike of choice par excellence. And while most of 70s culture was thankfully destroyed in a giant global bonfire on January 1st 1980, one of the things that did survive was BMW’s magnificent orange and black uber bike. So when Portugal‘s Oporto Motor Works pulled the trigger on reviving their clapped-out ‘74 R90S in 2015, it was decided that a little bit of the 80s would be mixed in with the 70s original to create something that was as much Duran Duran as it was Porno Moustache. Meet project ‘Boxerlust’. “Oporto Motor Works is my creation,” says shop owner, Steffen. “I dreamt it up it for my customising and restoration projects. But it’s not just ’another custom shop’; our position is more of a go-between for Portuguese moto specialists. We have some very well recognised customisers and workshops specialised in metal, paint and mechanics. My aim is to find overseas clients and handle all the necessary work for them to get the bike of their dreams “Made in Portugal”. My job is simple; working out the design together with the customer and then managing the building process and logistics. And finally to inform the customer about the progress and delivery of their build.”

“I always refused to call it a ’café racer,’ bemoans Steffen. “But as most people who see it say, “Oh wow, what a nice café racer!” I eventually accepted it. More specifically, it’s a BMW R90S from 1974 with matching numbers. The name ‘Boxerlust’ comes from a late 80s BMW advertising campaign that was spread via a flexible vinyl record included in many motorcycle magazines of the time.”

Steffen originally bought the bike in 1987 as a wreck in Düsseldorf and restored it for the first time in the following years. Adding almost 100,000 kilometres to the clock in the next decade, it was moved to Portugal in 1996, where it was stored in less than perfect conditions until 2015 when he decided to bring it back to life. “My inspiration was to pay tribute to the legendary BMW R90S, while rebuilding it in a way that I would have loved to have done in the late 80s when I first bought it. I wanted a clean, simple riding machine with a slightly more sporty soul.” And a note for the BMW purists among our readers. “This bike was already in very poor condition when I bought it in 1987, therefore I did not ‘chop’ an original R90S for this project. The bike was never original during the time I owned it and all the modifications are reversible; we did not cut off any essential parts and the frame geometry, running gear and seat positions are the same as the original one.” Phew. The rebuild started in March 2015, when Steffen decided to get the bike out of the shed where it was stored. “And when I say ‘shed’, I mean ‘shed’. It was a wet, dusty and totally abandoned garage that I rented many years ago. I was always thinking of going ahead but I never found the time.” His first step was to completely disassembled the bike to get a better idea of what exactly had to be done. “Then I brought the parts to my friend Bruno – a former mechanic for the official Porto BMW distributor – and we made a structural survey.” After that, work progressed in the classic, time-honoured way; by discovering a cavalcade of unforeseen issues and desperately trying to fix them while not going broke. “Meanwhile, I was creating the bike’s new look and finding specialists in metalwork, paintwork and many other necessary art forms. Finally, after more than one year and with numerous delays that I won’t go into here, it was all put back together again in the workshop and brought to life. That was a great day. The last step was the paintwork and some redesigns on the fairing and seat cover.”

[superquote]“Work progressed in the classic, time-honoured way; by discovering a cavalcade of unforeseen issues and desperately trying to fix them while not going broke.”[/superquote]

Steffen then reels off a list of the classic bike’s special touches, including Silent Hektik electronic ignition, a lighter clutch from the most recent two valve model, a Hattech exhaust system, and an Acewell speedo. And the bike’s new handmade pieces include the rear frame, seat, fenders, fairing, side covers and rear light. The project’s challenges included a cylinder heads that spent almost half a year at the machinists, and a less than acceptable initial paint job. “When I realised that the paintwork was not as good as I wanted, I decided that it had to be redone. We had planned to give a sneak preview at The Timers Motorsport Revival Festival in Oporto, organised by our friends from Ton-Up Garage. Luckily, we met To Zé from TZI Customs who redid the paint in a very short time.” “The perfect ’curve’ that it has when you look at the rear end over the seat cover is what I like the best about the finished bike. I think it’s probably the sexiest seat cover alive, as several people have mentioned it. I also like how the bike’s engine feels after all this time; it is still a stunning experience and I like the difference that these Dellorto 38 carburettors make to the engine as compared to the usual ‘Bing‘ stuff that the following models had. My approach was simple and I think I achieved it; I wanted a classic riding machine. And a good-looking riding machine.” We think he’s got it.