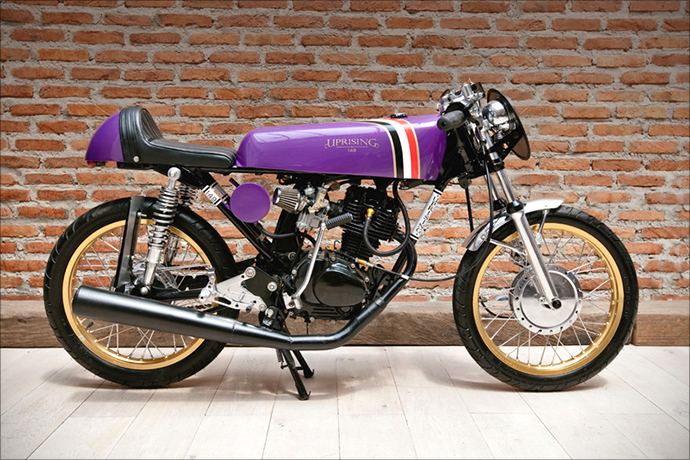 Purple. It’s not a colour you choose to coat your beloved custom with lightly. If you’re anything like us, you’ll just default to rattlecan black, or maybe live on the wild side and go for a metallic white. Crazy! Hell, purple’s not a colour you’d often choose to coat anything with. When’s the last time you walked down the street in a purple shirt, or considered a nice shade of lilac to give your house a little zip. That’s right, just about never. Ever. Unless you’re four foot nothing and you have the words “formerly known as” in your name. How then, you may ask, do those mechanical magicians at Jakarta’s increasingly bitchin’ Uprising customs manage to make such a damn funky colour look so stupidly cool? Well, I asked them. And they told me something you’re not going to believe. “The bike is a 1974 honda CB 125. The story of this bike was that it was my bike which I’d done with a builder who goes by the name Katros. Then it was bought by a good friend. He wanted us to make some changes – basically just the handlebars and the paint job. Then we took it to our friends Yusuf Abdul Jamil and Rio Hermanto at Pistone Terrasse to collaborate with on this bike. So we looked and researched and dug up this paint job that was from and old Italian race bike. We added yellow for the number plate in the front to make it sweeter and we put up the logos on the frame to get an old road bike feel.” “I’m always inspired by all these crazy colors of racing bikes. Somehow for me it’s crazy how they can pull of those colors back in the day. The engine itself is fully rebuilt but standard.” “The tank and tail is all custom made. The rims are TK gold rims in a size 17 to get that small, vintage cafe mood. Tires are Mizzles (no, we’ve never heard of them before either) in a 70-90-17 up front and a 80-90-17 rear. We also cut off the fenders. The original drum brakes of the CB 125 are really small, so we got the drum brakes of a CB 200. As mentioned, the engine itself is pretty stock, but living in a country with such a bad traffic record this bike suits it well. The exhaust is custom made as well. And last but not least we added the clip on’s. We didn’t put any sort of electrical starters on it so the clip on’s would look clean and simple.” “This bike took a couple of months to build at first, and then a couple of weeks to revamp the whole bike again for the new owner, but once this bike was done it was like being back in the days when you just had been given a new bicycle. Small, fun and it’s one hell of an eye candy machine. We did so many sketches on the color, graphics placement and the gold rims… and with the yellow number plate – it was pretty much a gamble, it could’ve looked good or just way bad. Hahahaha! Even now the bike itself is a love/hate thing for some people. But hey, I love it and it was a real joyride designing this bike.” What’s that you say? The purple story? Oh, ok. Firstly they turn all the lights down. Then they put some Hendrix on the stereo, but they play it backwards and very slowly. Then they meditate until they enter a trance-like hypnotic state in which various purplish meta spirits enter their bodies and take over their muscles and pretty soon they find themselves dancing. Dancing and spray-painting. Then everything goes blurry and they don’t remember much. Look, there’s a fish. It’s talking Spanish. And there’s some lights coming out of that man’s fingernails. And the air is thick, like hair gel. Look, there’s Charlton Heston! He’s wearing a jeggings. True story.