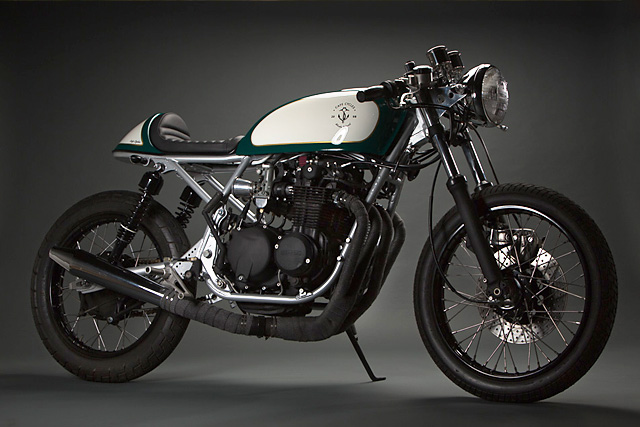 The CB550 was not a staple of the classic café scene back in the halcyon days but if they built them like Café Cycles that might have all changed. With the Café Racer culture booming again it’s easy for the new generation to forget its simple roots.

Most of the world’s biggest custom builders and even manufacturers have turned out big dollar Café bikes, but in a small workshop in Rhode Island a lover of British bikes and a master of hand formed aluminium parts, Pete Chase is proving the old simple ways still work. In fact he likes British bikes so much he barely cuts them up, preparing to turn out perfect custom Hondas with a British flavour! Having half a dozen CB500 and CB550 bare frames in different states of disrepair in his workshop Pete needed a spark of inspiration to get this particular bike going. That came when passing by a yard sale he spotted from the corner of his eye what appeared to be an inline four cylinder engine. Pulling over he discovered it was in fact a CB550 engine that turned over relatively easily, asking price, just $40. Now with just a frame and engine to work with Pete set about building a masterful café bike just like it was done in the days of old. To ensure the CB would be firing for many years to come the cases were split and a full rebuild undertaken. The rod and crank bearings were Plastigauge’d to ensure all were to spec while the primary chain and all bottom end seals were replaced. These are smart changes to make on any CB engine that has been left sitting, so to the new clutch and springs Pete installed. Up top the cylinders were honed, genuine Honda rings fitted and the head rebuilt, with mild porting, lapping of the valves and also polishing the cam lobes and rocker arms. With the engine now ready to give years of active service Pete selected the right frame from his collection and then set about cutting it in half. In his own words “I basically chopped the bike in half right behind the gas tank. I built a new rear end with hoop in the back. I made new shock mounts about 2-1/2 – 3 inches forward from stock. On the swing arm I moved the lower shock mount forward by about 2 inches. This allowed me to lean the rear shocks forward, and raise the ass end up” and who can argue with that, a man on a mission with a grinder cannot be stopped! While this is definitely a Japanese bike the tins and paint work combine the best of British. The old art of hand forming metal is one of Pete’s specialities and he made the beautiful seat pan and cowl in true Café Racer style. The tank is from a later model CB550 and what could be more Old Blighty inspired than a colour scheme of British Racing Green and Wimbledon White. The paint work is so good you’d never guess it was done in his parent’s garage due to an overcrowded workshop. The Lucas light, velocity stacks, Norton style exhaust and blacked out engine all hark back to a day of simple, classic styling. Japanese bikes weren’t exactly popular amongst the café crews of the 60’s, but if you took any of the Café Cycles bikes back to the glory days of the Ace Café it’s hard to think that even the tea sipping Norton aficionado’s wouldn’t be reaching out to shake Pete’s hand, Bravo!