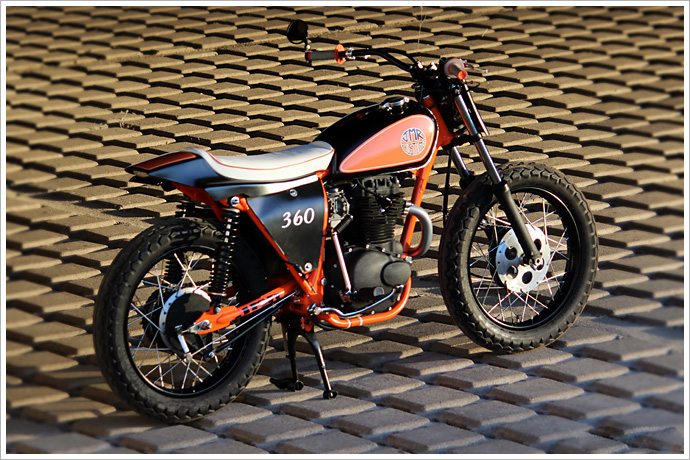 There’s a saying that goes, “old Harleys never die, they just get faster.” Which, of course, is utter rubbish. Most of the Harleys I’ve known barely work fresh out of the box, let alone when they get old. Find and old HD in a barn and you’ll have about as much chance of getting it running there and then as you’d have finding someone with good taste at a Nickleback gig. But the same is definitely not true for the works of one Honda Giken Kogyo Kabushiki-gaisha. We’re not sure what dark, samurai magic the man possessed but it seems from where we stand, just about anything Soichiro Honda touched somehow gained the strength to never, ever, EVER die. Just ask Josh from Boise, Idaho’s JMR Racing. “This is Josh Mott owner of JMR Customs of Boise, ID. We came across a 1974 CL360 Honda donor while dropping a Moto Guzzi off to a customer. The lady had the bike sitting in her garage, it was in rough shape. When I say rough shape, I mean it was probably the worst one I have ever come across. I asked her about it and she seemed relieved that someone was willing to get it out of her garage. I brought it back to the shop and checked the normal spark and compression. The bike had both so I cleaned the carbs and she fired first kick.” “After I found out the bike ran I started trying to come up with ideas. Street trackers have always struck my interest because when I was younger I raced a lot of flat track. The CL came with stock scrambler up pipes so I went with a Mini XR 750 Harley theme.

Most of the work was cleaning. I did have to freshen up the top end, rebuild the carbs and rebuild the suspension front and rear. The little things that I would like to point out are the bottom stand, mainly because you hardly see anyone use bottom stand these days. Other things include the front hub with machined holes, the counter shaft sprocket cover with machined out holes and the crinkle paint on the motor.” “Parts mounted include the mini megaphone mufflers, dirt track bars, Mulholland shocks and a Trail Tech speedo. The fabrication work included a battery box to hold all the electronics, lithium iron battery, side number plates and the headlight. The headlight was built by hand out of 16 gauge steel using 50 watt bulbs; it was built to be a multi-use number plate. It still keeps the flat track look while being a headlight and dashboard for the trail tech.” “The bike rides amazing and sounds cool as hell. I am very pleased with how this bike came out considering what I started with. I cannot wait to show the previous owner what her old bike looks like now. This bike is currently for sale and will be on eBay within a couple months.”