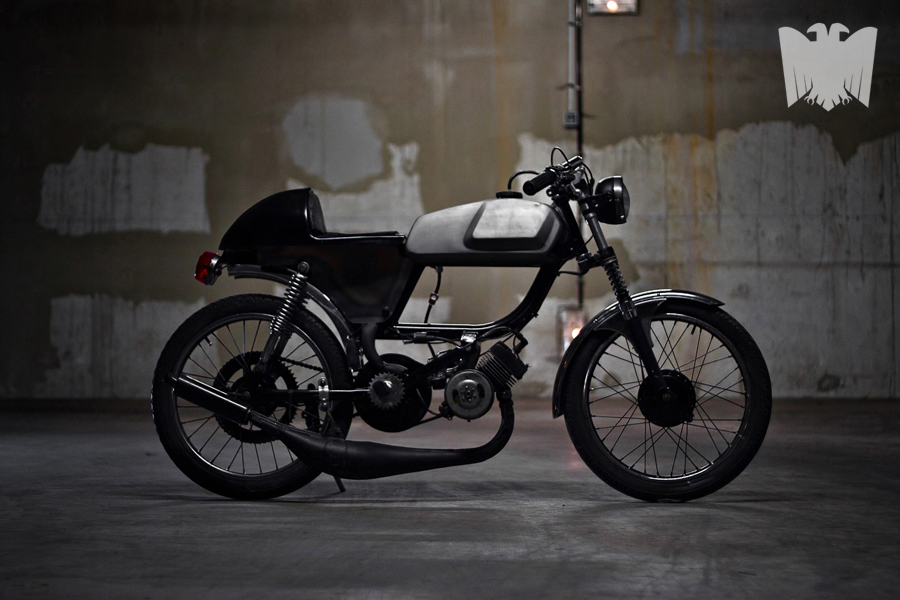 How do you start a story about a simple but elegant Peugeot Moped cafe racer? Do you compare it to a slender French super model? No, too shallow. Do you open by telling the amazing history of Peugeot and how they’ve been building motorcycles since before your great grand daddy was popping wheelies on his penny-farthing? Nah, that could seem like a history lesson. Or do you just show the beautiful photographs sent to us by the builders of this French moped and let them tell their story? Probably best. Well, this little 1974 50cc moped was built by Thomas Patouillard Demoriane, who is part of a Parisian moped gang that go by the name of ‘The Children of Decadence‘. Here’s how Thomas describes the project: “Our journey begun on September 2010 when we saw a small ad on a French website for rare Peugeot TSA 1974. Although there was no pictures and only a small description, we called the seller for more information: the moped was used but in a good condition and the engine worked! Deal!

We brought it back few days later at home and tested it in real conditions: the moped was amazing but lacked power. After cleaning and basic maintenance it did not solve the problem so we bought some new parts. Our adventure took a bad way at this point because every single modification was followed by a new issue. Several air intakes, a defective carburetor, ignition trouble, the list of mechanical problems grew day after day. We had two options: keep searching or give up and buy a brand new engine. With the help of a great mechanic (Vivien thumbs up) we rebuilt the stock engine. After 6 months of mess, everything finally worked !

The mechanical parts fixed, we had to choose the general aesthetic of the machine. Bobber or Cafe Racer? The particular shape of the TSA frame was more appropiate for a Cafe Racer base, so we tried with a fiberglass cafe seat and enjoyed it. A few last puchases like a Ninja F50 exhaust, controls and the bike departed the workshop.”

“In the end it took about 40 hours to give this machine a new identity, and its renovation brought its share of surprises: the fork was actually a Paioli unit hidden under a layer of paint, the two brackets on the handlebar was made of beautiful brass and the front hub belongs to a Suzuki bike!”

What it lacks in horsepower we think it more than makes up for in style – especially for those that like a little bit more junk in their trunk. You can find more specs about the build here, and also a tasty teaser video of the bike here. Bon appétit.