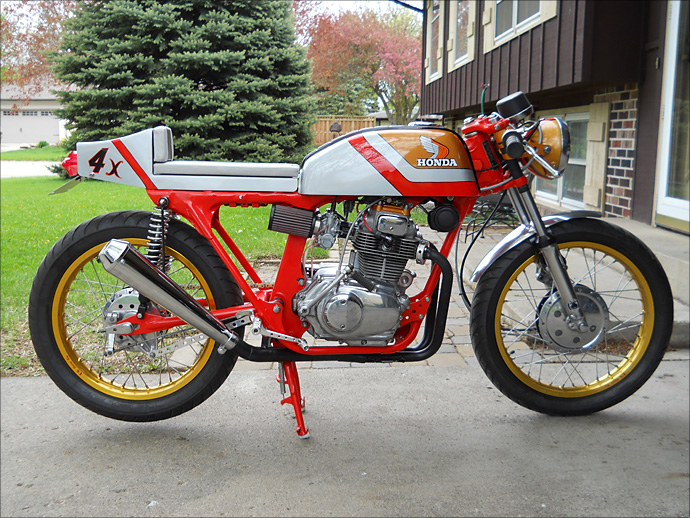 The Beatles. A great band. Actually, the greatest band. And do you know why they rock so many record collections and get raved about so much, so many years after they split up? It’s because they were so amazingly eclectic. In other words they weren’t slaves to one particular style of music but instead they simply had superbly developed taste, allowing them to cherry pick sounds and styles from pretty much any musical source they liked and somehow transform it into an amazing song that would inevitably top the charts globally. Only a band like that can manage to stay so popular and so loved for so long. If they had just re-written “Love Me Do” over and over again they would have been a flash in the pan, but instead they pushed themselves to do more, and to do it better.

Meanwhile in Spencer, Iowa… Yes, as promised here’s Kevin White’s other amazing bike. First, a killer bobber – then an amazing Café Racer. I don’t know about you, but if he manages to do another great bike in yet another sweet-ass style I’m definitely considering a jealously-filled grudge towards him. How can one guy be so good at two such diverse styles?

Here’s Ringo… I mean Kev. “My dad bought a junk CL175 a few years back and did nothing with it. I traded it to my buddy with the cycle shop (where the Triumph engine came from) for an untitled “better” CB200t. I took it home and stored it for a year.” “Last spring, I dug it out and got it running. Having the confidence it was a good piece to start with, I tore into it. The same friend with the shop ended up with a titled frame which he gave me. I switched frames and started in. I ditched the stock front hub (mechanical disc) for a CL175 hub, drilled holes, polished, painted, and laced gold anodized rims both front and rear. Next, I notched and re-inforced the backbone of the frame to fit large K&N filters. I then made a front fender on a friends’ English wheel and made the clip-on handlebars. I fabricated up a set of rear sets from used parts and made the seat pan/tail section out of aluminium, which the local college welded for me.” “I sourced some VM Mikunis and Hagon shocks. I made the 2-into-1 exhaust system and turned out the exhaust collets on the lathe. I rebuilt the engine, installed oversize pistons, did some light port work and assembled. Once I had the general shape I was looking for, I stripped it and prepped it for paint.” “I painted the frame first, then painted the tank and tail silver to begin with. I then put down the gold and orange. I wasn’t sure I liked it, but with good advice over at the Do The Ton website, I kept it and incorporated the black pin stripes on the tank. The 4x number was my Dad’s old number when he raced cars. It was a fun project and it’s a fun bike to terrorize the neighborhood on.” And wow. Just picture yourself all alone with this bike, a sunny warm day, a cool breeze, and a Long and Winding Road. Um – okay then. Please address all emails concerning bad puns and Beatles song titles to “Scott”, c/o Pipeburn.com, Sydney, Australia. Or just check out the build over at Do The Ton.