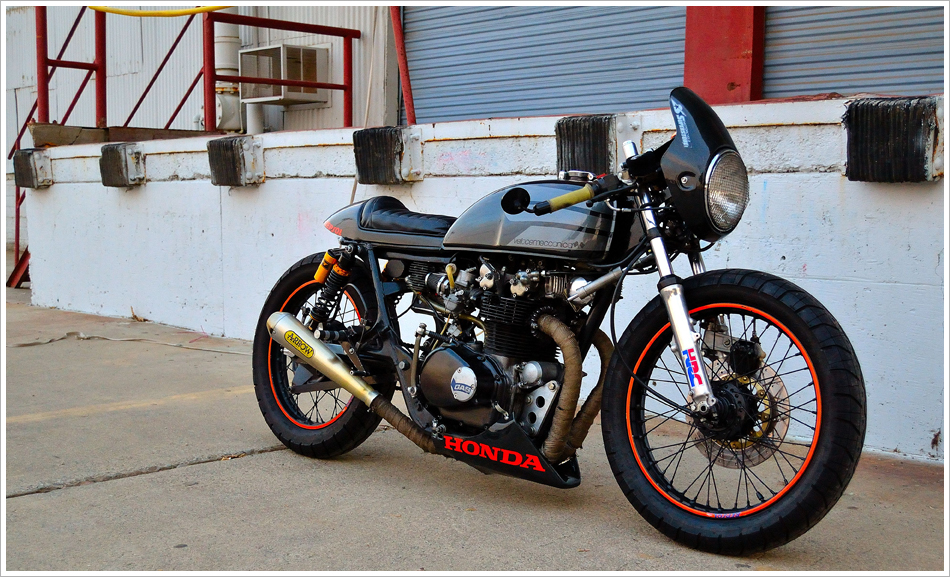 It might not be the superbike he is used to, but wouldn’t you love to see the World Champion Casey Stoner ride this Team Repsol inspired 1975 Honda CB500 around Phillip Island for some timed laps? Sure, he might not get close to his usual times but he would sure strike a more dashing figure. This immaculate CB was built by 24 year old Josue Alvarez (or Josh to friends) from the central valley in California. It was recently crowned Do The Ton Bike of the Month, up against a couple of great little motorcycles and a bucket of parts. Yes, you read that correctly. “It’s been more than a years work,” says Josh. “I always keep finding something I can upgrade. The bike is my interpretation of the team Honda Repsol Superbike – a vintage interpretation.” The story starts like most bikes featured on these pages. The whole bike was stripped to a bare frame and thoroughly gone over; from the engine, pistons, valves and anything else that looked like it needed a little love.  The frame was shortened and re-braced, the swing arm was stretched by 3 inches and the bike was lowered at the front by 1.5 inches to compensate the geometry as much as possible. Josh also added adjustable nitrogen rear shocks, a 2-1 exhaust wrapped and pushed into a reverse cone, a Suzuki GSX R1000 steering damper and the mandatory clip-on bars for a bike of this vintage. A custom made fiberglass Thruxton mini fairing was fabbed, plus a slick fibreglass seat and tail – all painted in Repsol colours by Josh himself. With a spec list longer than Casey Stoner’s win sheet, we think Josh has created something special building this unique Honda Repsol CB and we’re not the only ones who think so – the build also managed to land Josh a part time job at a local custom bike shop called Monkey Fab. This CB500 might not be able to keep up with the superbikes of today, but we reckon it has just as much kudos or more. Don’t you think?