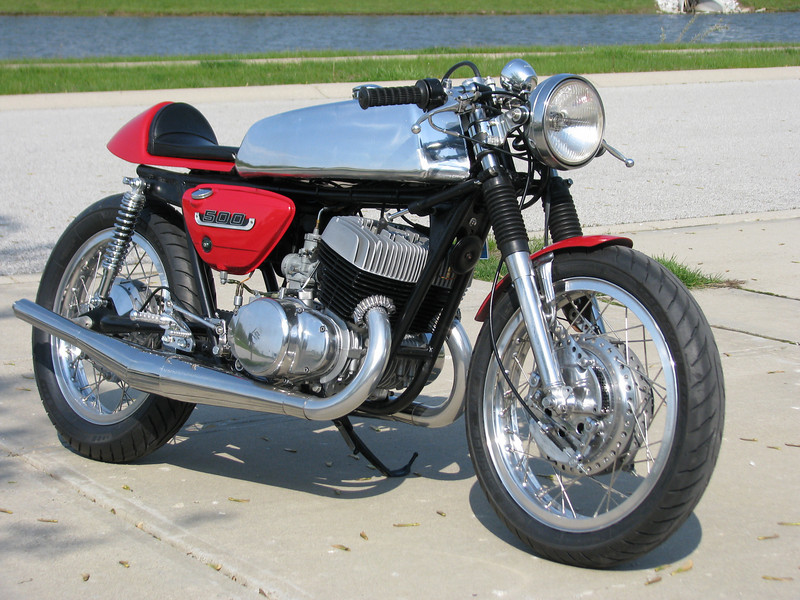 I always love finding out what people do for a living. Most people find their chosen occupation boring as bat poo, mainly because they have to do it for nearly every day of the week for 10 hours a day (or more). But sometimes, from an outsiders perspective some jobs just sound so friggin’ cool. Take Mark Wolf for example, he is the owner and builder of this fine Suzuki T500 cafe racer. I asked him the question I ask most people whose bike we are about to feature: “Tell us a little about yourself” in which he replied “Nothing remarkable about me. By day I’m just a licensed aircraft mechanic who builds turbine jet engines for Rolls-Royce.” What? Just an aircraft mechanic who builds jet engines for Rolls Royce? Is it just me, or does that sound awesome? But then again, I’m not the one doing it everyday. It is safe to say that when it comes to rebuilding motorcycle engines, we think Mark can probably do a pretty solid job. “I’ve rebuilt a few wrecked sportbikes over the years but the T500 is my first attempt at any sort of vintage or cafe project” says Mark.

Here’s how Mark describes the T500 build. “I bought the T500 in March of  last year. I found it through an ad placed on the ADVrider.com web forum. It was a few hundred miles away in Knoxville, Tennessee but the price was right and it was a running bike. It was a very complete and unmolested bike but was showing it’s age. Given the overall condition of the chrome, etc. it would have been much more expensive to restore than it was worth so I didn’t feel too bad about cutting her up. I originally planned a quick and simple project with just a seat change and some clubman bars but the project grew quickly and turned into a complete rebuild.” “The tipping point was when I decided to replace the tank. I don’t have a lot of metal fabrication experience or tooling at home so I enlisted the help of Sean at Roc City Cafe for the tank. I sent Sean my stock tank and a few measurements and we quickly decided that a tank based on the Honda CR style would be the best fit for the bike. Sean did a wonderful job and the tank dropped right on. Sean definitely deserves a “shout out” for his efforts. In my opinion, the tank really makes the bike. It took a few months to get the tank so I decided to freshen up the engine while I waited. The crank was rebuilt with fresh seals and the cylinders bored for a set of 0,5mm over pistons. I kept the engine stock overall. The only big mod was an upgrade to electronic ignition.” Mark’s overall goal for the project was simply to have a reliable and great looking cafe styled bike. “I really didn’t do any performance mods aside from eliminating weight wherever I could. I did want to improve the braking though but I wanted to stay with drums. I found a 4LS drum from a GT750 and laced it, along with the stock rear drum, to a set of 18″ shouldered aluminum rims.” “The build couldn’t have been done without Sean at RocCityCafe for his work on the custom tank. Sean also supplied the seat and front fender, these were off the shelf units that Mark modified to fit the bike. Also Titan Performance made the expansion chambers and rearsets. ProKote Indy did the frame powdercoating and header ceramic coating. Lastly, Mark wanted to give a bike thankyou to the fine folks at the DotheTon.com forum. “It’s a never ending source of great builds, inspiration, and advice.” We think Mark has created the “Rolls Royce” of Suzuki T500 cafe racers and there is a ton of info and build pics on Mark’s thread on DoTheTon.com.

(Big thanks to Mike Dock aka VonYizer on D.T.T. for the tip. Keep ’em coming, lads!)