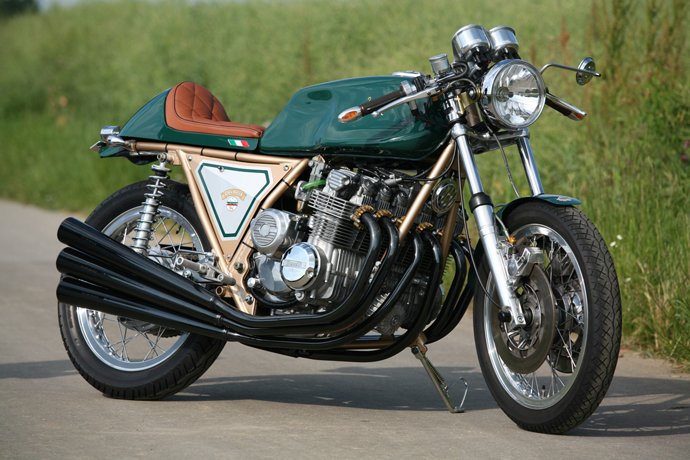 Oscar Wilde once said “Beauty is a form of genius”. If this is true, then German builder Julius Bott is one clever guy. Julius built this beautiful Benelli Cafe Racer after purchasing it from a friend a few years ago. It was a complete wreck, or a piece of “sheisse” as they might say in German. It took Julius two solid years to rebuild this bike from the ground up. He knew right from the beginning that he wanted to build a classic styled cafe racer. Julius started by completely overhauling the engine back to better than original condition – it still produces 58 hp. Amazingly, the Benelli Sei was the first production motorcycle with a 6-cylinder engine – based on the four-cylinder Honda CB500 only with two extra cylinders. Julius has added many things you wouldn’t find on the original though. Like the tank which is an old Honda racing tank and the seat is off a Laverda. He also replaced all the electrics and repainted the frame in a striking gold. One word sums up this stunning project, and it’s the only other German word I know (apart from Bier)… wonderbar!
[Thanks Michiel at BMW Cafe Blog]