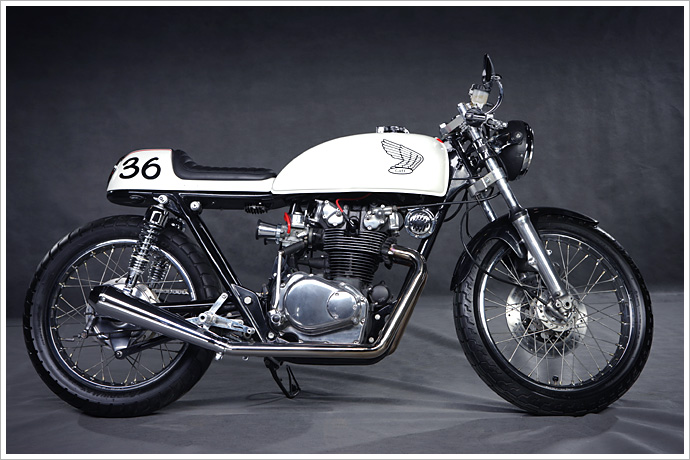 It feels so much more meaningful when you do something yourself. It’s even better when others have a chance to take enjoyment in what you have decided to do. And to be able to affect a whole area’s bike culture is an amazing task in itself. Sam Maksimovsky – who is only 16 years old – of Caffeteria 36 has done this, and along with building up the café racer scene in Moscow, has built a bike which is testament to his passion for this style of bike. Taking a 1976 Honda CB500T and his father’s advice, he has built into it his own styling cues, based on his fondness for the culture of the 60s & 70s. Oh, and having nine months of Russian winter to build the bike came in handy as well.

After cutting his teeth riding on a KTM as a kid, Sam began to put some serious thought into his next set of wheels. While considering this, he came across a picture of a café racer on the net, and was instantly smitten. Sam decided that he should join a custom bike club in his area, but was surprised to find none, and thought to himself “why not make my own?” A blog, then an instagram account posting a café racer every day, finally culminated in caferacerclub, aimed at Russian custom bike builders looking to share hints and tips on bike customisation. And the first bike to come out of this endeavour is one hell of a build. The CB500 was brought into the 36 Customs workshop, where it didn’t emerge for another 11 months. After lightening the frame, then simplifying it, a new seat was fitted along with the obligatory ducktail fairing. Clipons and rearsets have been fitted as well, along with smaller indicators, all so Sam will have less chance of clipping anything while letting the bike live up to it’s image. The CB’s engine has been given a workover as well, being fully rebuilt, painted and polished as required. Standing proud and pipewrap free is the exhaust, ending in Dunstall style silencers firing carbon dioxide skyward. The factory airbox has been chucked as well, a set of velocity stacks sit proudly in its place. Sam’s desire to build a café racer has boosted Muscovy bike culture, started a bike club, and most importantly produced this amazing CB500 headturner. A podium finish in the metric class in the 2013 Moscow Custom and Tuning Show shows Sam’s quality of workmanship in the build. This bike is no show pony though, it is ridden to it’s fullest potential, with Sam cracking the ton on this ice white machine. It seems he has earnt his place amongst the café racers of yesteryear, the very people who he looked to for inspiration on this build. I bet they would be proud.