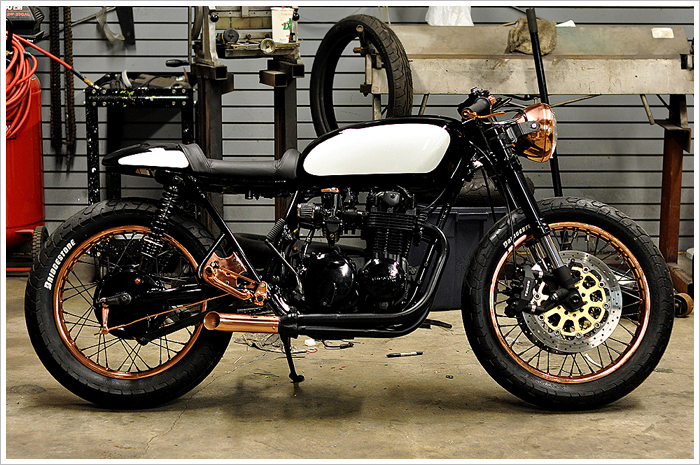 One trend that seems to be building momentum is the use of copper, brass or gold to accentuate certain parts of the build. Gold chains and rims have always been popular, but they seem to be making a come back. We think this CB550 has got the balance of copper just about right. The rear sets, levers, exhaust tip, headlight and rims are enough to get your attention – without turning it into a festival of bling. This classy café racer is the handy work of Alex Martino in collaboration with the talented Dustin Kott from Kott Motorcycles. Alex has had this bike in his head for some time, it just took a little time to make it a reality. As it turns out, Alex is a man of many talents. He’s a graphic designer by trade but acquired his fabrication skills by building custom show trucks in Chicago. After moving to L.A. he now spends his days shooting beautiful models as a freelance photographer. “I’m just a good ol’ boy in a city trying to make money and find time to spend in the garage” says Alex. You always remember your first, and this is how Alex recalls his… “I searched through the depths of the inter webs to find my perfect “first” bike. I have been around and been on bikes my whole life but never bought one with my own money. After finding the perfect project bike I contacted Dustin Kott in Newhall, CA to do a collaboration build on my 1976 Honda cb550f. I had a design in my head for the past two or three years that just needed to get out of my head and under my legs! “Once Dustin was on board, it was only three extremely fast months that I was taking the animal know as “PATINA” down the street. As for the build, the night I brought the bike over we had it stripped to a bare frame in less than twenty minutes. Once she was tore apart and de-tabbed we instantly started the reassemble for mock up. Dustin tackled the seat and rear sets while I fitted the 2007 GSXR 750 front forks onto the frame.” “Because my initial design had inverted levers on the clip-ons it was a challenge to figure the best solution for the front brakes. Once the bike was back to a roller and the visual fabrication was done Dustin and I put our talents together to tackle the relocated front master cylinder. I couldn’t be happier with the solution we ended up on. I was once told that if no one notices, then you did it right.” Alex and Dustin finished the bike on a Friday night and the following day they took it to its first show. “I had to show four judges that were walking around the bike that the handlebars had no front master cylinder on the handle bars. That show, “PATINA” ended up taking ‘best café’ out of over 400 bikes at the 5th annual VVMC (Venice Vintage Motorcycle Club) Rally in Venice, CA.” Not bad for his first build, don’t you think?