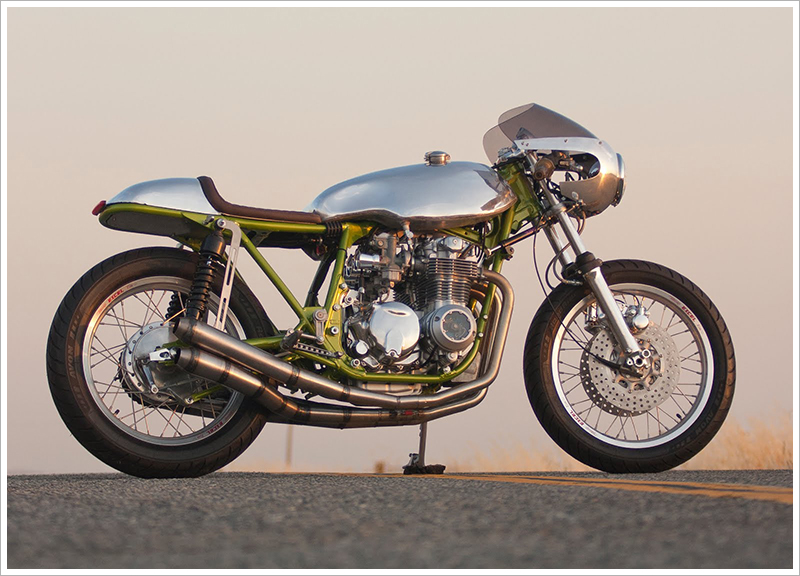 Who doesn’t love the look of bare metal? It gives the impression of so much potential, but can also be a finish in itself. Jason Moore of Flying J Customs is one man who is able to produce a bike using bare metal highlights, and his 1976 Honda CB550 café racer is packing more aluminum than a fridge full of leftovers. With performance to match the looks, today’s feature bike is bare metal goodness, with old school styling thrown in. Did I mention about the bare metal? Relieving the CB of it’s original fuel tank and seat, a Norton Sprint tank and tail combo has been fitted, custom made for this bike. “I wasn’t totally sure what I wanted until I talked to Richard from TAB Classics.” says Jason. “He sent me a picture of a CB550 frame with the Norton Sprint tank on it and I was instantly sold.” A bikini fairing sourced from Japan continues the aluminium aspect of the build, wrapped tight around an Acewell speedo/tachometer. Aluminum clip-ons and Raask rear sets build the café racer image of the bike, while a set of 18″ Excel rims laced with stainless spokes make up the rolling stock. In the engine department, Jason has made sure his bike goes as hard as it looks. 61mm pistons, running at 10.5:1 compression, boost the capacity up to 592cc. The mildly ported head, with matched intakes, is running a hot street cam. A set of aluminum velocity stacks breathe in, a race replica 4-4 exhaust system exhales. To increase the reliability of the electricals, some modifications have been made. Dyna 2000 ignition and mini coils replace the original system, a modern regulator rectifier and lightweight Shorai battery have been fitted as well. A second disc and caliper has been added for improved braking, as well as having the discs drilled and lighted by 2 lbs each. It has taken Jason over 5 years to finish this build and has built and sold many bikes in between to pay for this one. From the ported and bored out engine, to the beautiful tank and seat arrangement, he has built a bare metal beauty that any rider would be happy to race between more than just cafes – as long as they don’t mind a bit of polishing that is.

[To see more of this stunning bike, check out this very thorough build thread].