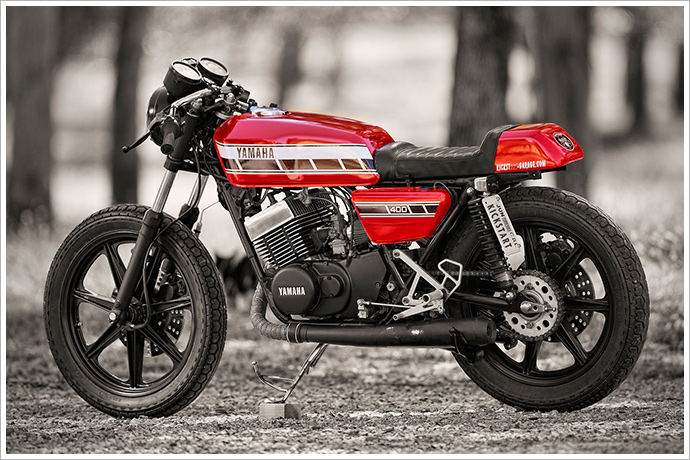 It just goes to show, you don’t need to over-think a colour scheme. Beautiful

What is it about small bikes? Most bikers will get the bug sooner or later. But just think about it for a moment. In no other area of transportation do you see this phenomena. Cars? With the notable exception of the Mini, you don’t see your average boy racer pining over something with less cylinders and a fraction of the go of their current buzz boxes. And how often do you think your average fighter pilot lays awake at night thinking about that bitchin’ ultra-light he wants to trade down to? Not to blummin’ likely. But things seem a little different with bikes. There’s an undeniable “thing” with the more delicate members of the species. They are small, light, chuckable and they let us feel a little like our favourite racing heroes with levels of horsepower that won’t punish those of us with more enthusiastic right hands. No need to tell this to Craig Marleau from Millville, California. He’s already there, and to prove it he’s banged out this stonking little two-stroke Yamaha to prove a point. Um, Craig? Point taken, my man. Point taken. Misunderstanding the word “horsepower”, Craig built a fence around the Yammie

“I’m Craig Marleau. My whole life, I’ve been building something with wheels – for racing or show – almost every model of Volkswagen, dirt bikes, restorations of British and European cars for the Pebble Beach Concourse and then some.  You can say I’ve got a thing for all things mechanical! One lesson I learned from the Pebble Beach restorations was extreme attention to detail! What I learned from racing, was performance! My deal is blending the two into a totally unique machine! I’ve got boxes of photos from some of my motorcycle builds over the last twenty years, but  I needed a new inspiration.

All my BMW, Triumph and Ducati builds were cool and unique but I still needed to get back to my roots – a soul bike, you might say. A 2-stroke, adrenaline pumpin’ mosquito killin’ cafe racer! Most of my projects have been cafes, beginning in the 90s, but my core love of 2-strokes was still calling me, and I set my sights on a new concept of an old vision! In 2009, I started Kick-Start Garage as a tribute to all things motorcycle and cafe! Then I found it! A 1976 Yamaha RD400 for sale in a place where no man should ever go by himself with a pocket full of cash! Does “Deliverance” ring a bell?” Could you ever get sick of an engine that looks that good?

“I brought it home, evaluated and stripped it down. Then the fun began. The frame and wheels were powder-coated, the sheet metal and custom fiberglass were painted “Chappy Red” and I used Canadian graphics – just because they’re different and a tribute to the retro inspiration. After tearing apart the engine, it was overhauled completely with WiseCo pistons, FMF reeds and a mild port job. The original RDs were fast, but I wanted to refine the true nature of the beast. I cut 11 1/2 inches off the exhaust, drilled the brake rotors, and machined my own foot controls to reverse the shift pattern. It also improved rider position, ground clearance and added to the overall reduction of weight. Front suspension features Race-Tech springs and new rear shocks. My custom seat fed the cafe spirit and kept the lines of the tank flowing through the rear of the bike. The Michelin tires completed the bike giving the traction needed for a daily rider.” “The vision was easy – a bike built to ride: no shows, no frills, just a good, fun, canyon-carving cafe racer! Turns out, it gets more attention at shows than those actually IN the show. This bike was a blast to build and when riding, feels like the beast it always wanted to be! This wasn’t the first bike I’ve ever built and won’t be the last. But one thing’s for sure – it gives my soul a stir that not many bikes ever have.” Here’s one we didn’t prepare earlier. The inevitable “before” photo

Thinking of buying another bike? Having trouble justifying the cost and/or use of space to your better half? Think small. You’ll spend less on parts and consumables and you may just find yourself becoming a better rider when you aren’t battling to keep that needlessly grunty engine from launching you into the scenery. Which is nice.