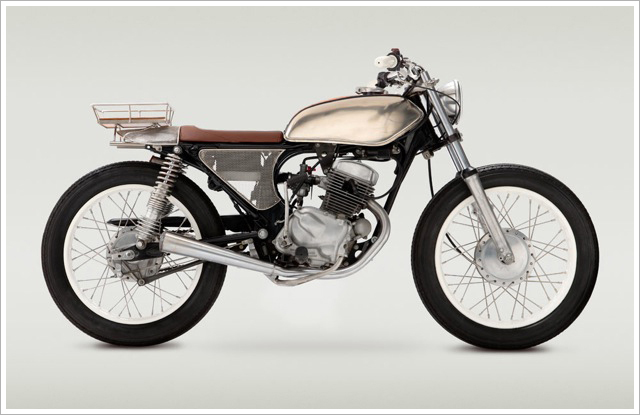 The saying “One man’s trash is another man’s treasure” couldn’t apply more to what Classified Moto do. First they used old bike parts to make stupid cool lamps. Then they turned the undesirable Virago into a stripped back sexy beast even it’s own mother wouldn’t recognize. Now they have turned a 1978 CM185 into a piece of art. “Like a lot of the bikes we work on, it was not the coolest bike on the block,” say Classified Moto owner John Ryland. The bike was built for ad agency producer Christina Cairo. Aparently she had never ridden a motorcycle before but loved what Classified Moto were doing and wanted one for herself. “We gave her the (unofficial) friends and family discount and she gave us free reign to do what we wanted,” says John. Luckily she wasn’t in a hurry because they have been working on the bike on and off for a year. It got back-burnered repeatedly as other bigger paid projects came in, but as you can see by the photos it’s now finished. And how. Over to John to run us through the work. “First and foremost, we wanted the bike to be completely approachable and non-intimidating for a new rider. We knew Christina would appreciate a more vintage aesthetic but we also wanted it to feel “Classified” even though it wasn’t “mean” looking. We didn’t really model it after any particular style. We just stripped it down to the bare essentials and gave it a nice level stance with 18-inch wheels front and rear (powder coated antique white). Custom stainless spokes finish off the larger-than-stock running gear.” “We used our standby perforated steel for the tail section, side cover and exhaust outlets. We used a tank from a 1970s Suzuki trail bike and created a stripe out of copper. Originally, we had done a yellow painted stripe, but it didn’t end up looking good with the brown seat (made and shaped from scratch in-house and upholstered by our buddy Roy Baird here in Richmond, Virginia) so we experimented with the copper.” [superquote]“The bottom of the basket is made from an old water ski. Not sure why.”[/superquote]

“We nickel plated the side cover, tank, tail section and basket, which is one of our favorite parts. It was made from scratch in the shop, eyeballed to match the imperfect bends of the tail section. It slides easily in and out of the frame’s seat rails and is secured with pins. The bottom of the basket is made from a section of an old water ski. It felt right. Not sure why.” “The taillight was an experiment using a fishing rod holder from an old boat of mine that nearly sank years ago. It’s not a thing of beauty, but it has a good story. The bike sports Japanese Posh grips and Bates-style headlight courtesy of our buddies at Lloyd Vintage. Christina’s hands and arms will provide signaling duties, and speed will be tracked via iPhone with SpeedBox app and a custom mount.” “Power-wise, it’s actually a 180cc (guessing the “185” was a marketing exaggeration) but we did open up the exhaust, add a pod filter and jet the carb. Still not going to impress on the salt flats. We’re hoping this one will be popular with people who might otherwise be intimidated by motorcycles, as well as those who like the idea of a fun little “around town” bike.”

Classified Moto have done what they do best – turning trash into treasure by using objects that have probably never been found on a motorcycle before (and probably never will again). And photographer Adam Ewing has again captured some amazing shots of the bike. Golf claps all ’round!