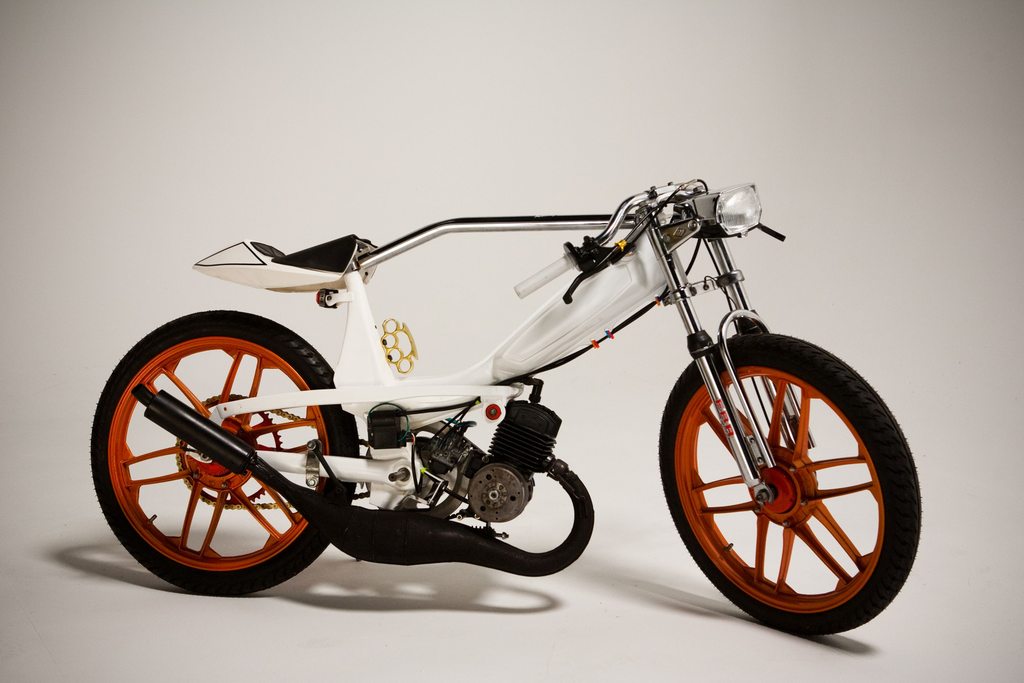 There’s not many vehicles in Australia that would earn you a police search and a close inspection of the business end of a boom stick, but believe it or not this bike would. Because it’s illegal. Actually it would also be illegal in Britain, Sweden, Austria, Germany, Netherlands and even Canada. Not because it exceeds any noise or build restrictions but because those big-ass brass knuckles under the seat. You see, knuckle dusters are illegal in most countries. In France where the Motobecane Moped rolled off the production line 30 years ago, brass knuckles are legal, but carrying them requires a license – not a bike license either. The French term for knuckle dusters is ‘coup de poing américain’, literally ‘an American punch’. So we think it’s fitting that an American, Jarrett Petty of Austin Texas gave this French moped a serious make over. You could call it an ‘American Punch’ to the eye balls.

The brass knuckles may look like a fashion accessory on the bike, but they are actually functional as well, being used as a handle to lift the bike. Usually people use the plastic seat which puts a lot of pressure on the cross bar. Jarrett was inspired by some brass knuckles he saw on another bike that where being used as a choke.

There is not much to these mopeds, but Jarrett has managed to stamp his style on nearly everything he possibly could. Including new chrome forks which are made by EBR, striking angled cross-bar, customising a seat from a Polini racing pocket bike and new ‘freshly squeezed’ orange rims. It’s not all show either. Jarrett having previously worked at Austin Mopeds as a mechanic also took the moped well beyond its stock performance. Replacing the original AV7 crank cases with a set of AV10’s. He also opened the airtake and then matched the transfers to a 50cc Doppler cylinder. A machined Doppler endurance crank was used because the bike hits very high RPM’s and cheaper cranks can’t handle it. The exhaust is from a Ninja G3 and helps the two stroke engine scream out louder than ever before. The moped as stock should have a max speed of 30mph. After Jarrett finished with it it now hits 50mph. Lastly the gold 420 racing chain was chosen to match those gold brass knuckles for the final visual punch.

[For more on this stunning moped, check out this Hell for Leather article]