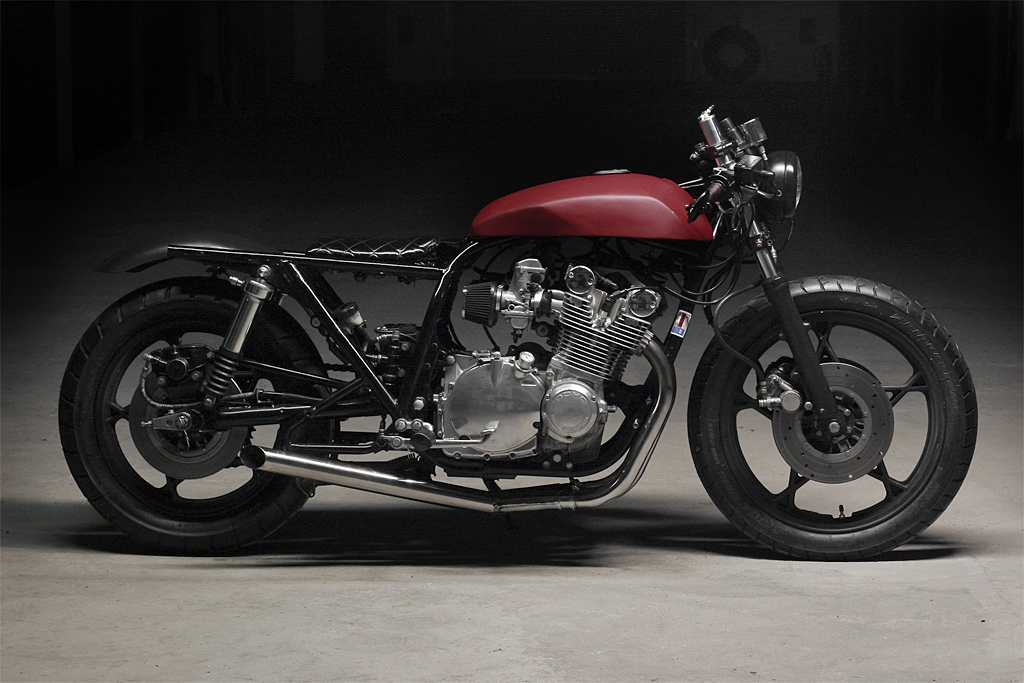 Ask yourself this question: Would your wife or girlfriend let you use her designer leather handbag to make a seat from? Well, Filip Bardy, the Slovakian owner and builder of this sweet GS1000 managed to convince his girlfriend to donate her handbag for a “higher purpose”. You see, there aren’t a lot of motorcycles or bike parts in downtown Slovakia. So Filip had to be resourceful, and if that meant chopping up his misses’ 2010 spring/summer collection, then that’s what he had to do. To be honest, black leather was soooo last season, anyway. Filip only decided to build his first bike 6 months ago after getting badly bitten by the bike bug. Here’s how he describes the build in the former communist country:

“The whole process started half a year ago when I finally couldn’t resist the idea of having a bike. Especially when I saw old bikes such as pre-war BMWs, Triumps, BSAs. Although there are very few of those bikes in my country, therefore they are insanely expensive. Importing them from other countries such as Germany is difficult and getting vintage import bikes on paper is almost impossible. I planned to ride it not look at it. Also, the deeper I was looking into the subject, the more I realised that what i actually wanted was to build my own bike. At this point Pipeburn was great inspiration for me. I realised that under all that disturbing plastic of Japanese bikes from the seventies, great potential is hidden. That I can build a bike that will look vintage and at the same time will have the dynamics and size of modern bikes.

But again there was a problem with the source. In the seventies, my country was under communist regime and the market was strictly closed to most imports. So the only bikes from that era you can get are Jawas, MZ’s and so on. They might be good bikes but too small and too weak for what I wanted. In the end, my choice was narrowed down to four Japanese bikes for sale that somehow ended up in Slovakia and had valid papers. So i choose the biggest one 1979 Suzuki GS1000 even though it wasnt running. I also ended up buying a GSX 500 as a possible donor, mainly because I liked the owners comment in the ad: “if not sold within 2 weeks I will burn it in a junkyard.” Filip had no past experience with bikes and was learning everthing as he went. “I didn’t even have a drivers permit for motorcycles so did my tests while i was working on my bike” he says. The whole build process took Filip about 400 hours. Again, for the third time resources were a problem in Slovakia. “I had to order many parts from abroad and I also travelled to some Austrian shops.” A lot of the parts were handmade by Filip and his Father and brother, including rear fender, license plate holder, rear turn lights in the frames tubes, exhaust and muffler, electric part holder, and that beautiful red gas tank from a gsx 500 which was heavily modified.

So what you see before you is the result of two months hard work by a first time builder, in an unheated garage during a very cold Slovakian winter. Pretty impressive stuff. As for the photos, Filip took them on his Canon 20D a few days ago in the same garage where the GS1000 was built.