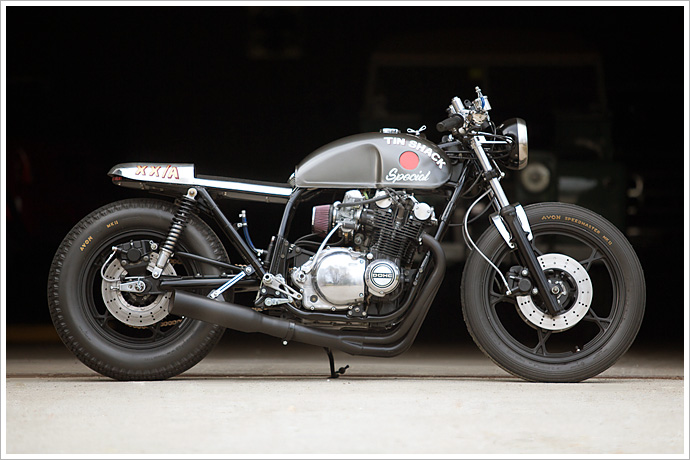 It probably won’t surprise you to learn that many custom bike builders and shops sometimes also dabble with custom cars. Less café, more drive-in diner you might say. If you ever follow the links to the builders websites in the stories we post you’ll undoubtedly see the odd hot rod, classic Porsche, or muscle car lurking around in the background. But what did take us by surprise was the way Colby Morris of Tin Shack Restorations gets his four-wheeled kicks; he has a burning desire to bring old Land Rovers back from the dead. And if this is the kind of bike that gets made when these rubber boot and pheasant hunting types aren’t, er, pheasanting then it’s fine by us. Presenting ‘a series Land Rover and motorcycle hobby run amok,’ here’s a ’79 Suzuki GS750 they call the ‘Tin Shack Special.’ “I’ve owned or ridden some form of motorcycle every year since 1968, the very first being a Rupp Roadster; a 5HP beast!’ says Tin Shack’s owner, Colby Morris. “I raced motocross for several years, and went to road racing school but never made it to a starting grid, I think I’ve owned pretty much every kind of bike – dirt, enduro, standard street, several crotch rockets, big adventure bikes, couple of Harleys, and a couple of full custom choppers. I also picked up a Series Land Rover habit about twelve years ago. First just driving, then improving, then modifying, and now frame up restoring.” “The idea for the Suzuki came a little over a year ago after an old motorcycling friend told me about your site. I literally stayed awake at night (far too late some nights), scanning through your archives. I was just finishing up a particularly nasty (lots of rust repair) Rover project for a gentleman in New York and needed something fun to do.”

“I was just finishing up a particularly nasty Rover project for a
gentleman in New York and needed something fun to do.”

“I found the Suzuki on the local Craigslist, a 1979 GS 750L with just over 10k miles. The “L” model was not my first choice but it was close to home and a nice running bike; all I had to do was scrap the sissy bar, chrome luggage rack, tear drop tank, and mini ape hangars and I would have something. I wanted to end up with a bit of drag bike/cafe racer look – a point and shoot bike.” “The bike was stripped to bare frame, wheels were powder coated black and Avon Speedmasters mounted. The first tank was an ebay gs 750E model that turned out to be a GS 1100 tank, didn’t fit, next up was the ubiquitous Benelli tank, it wouldn’t fit either so I cut out and rebuilt the backbone of the frame; I now had a cool tank with a top mount wing nut off of my early 70’s Gios Torino track bike. Tarozzi clip-ons and rear sets were ordered, along with Pingel switch gear to clean up the handlebars. The 70’s vintage dirt bike fork brace was another eBay find.” “I have an old 1966 Bridgeport vertical mill that I used to mill down the top triple clamp, make an exhaust hanger, and carb hose manifolds, and cross drill the rotors. The brakes were treated to new EBC pads and Goodridge stainless lines courtesy of Z1 enterprises, and I replaced the reservoirs with Tygon tubing. Everything not necessary on the frame was shaved off and a rear hoop was bent up and welded on. I made a stainless tray that would fit flush to the frame under the seat cowl and house all of the electronics, including a Ballistic Evo battery laid on it’s side.” “I made the seat cowl out of 14 gauge 6061 aluminum; it’s three separate pieces shaped, then tig welded together. The welds were ground down then filed flush, I then polished the cowl, I love the raw aluminum look, it takes a ton of time but well worth the effort. I’m sure I’ll take some flak for the seat as it’s nothing but superbike seat foam that gets the job done. Remember, point and shoot drag bike – no cross country rides on this one. The paint is Mini Cooper Royal Grey flattened a bit, with hand lettering done by Charlie Decker of One Arm Bandit Pinstriping.”