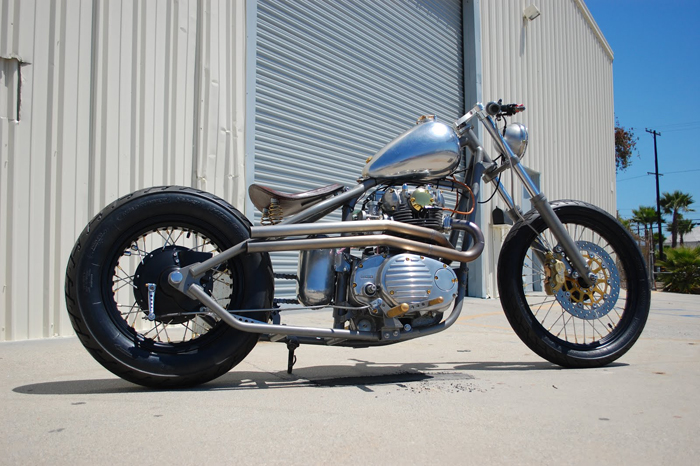 The humble XS650 might be one of the most common donor bikes on the planet but we still never get tired of seeing them when they’re done right. Like this stunning bobber by WSDMoto out of orange county CA. The bike recently got 2nd place at the 2011 LA Calendar MC Show which sounds impressive until you hear what the builder said: “This would be the first time I’ve gotten anything less than ‘Best of’ or 1st place since 2008. Kind of a tough pill to swallow, but still happy nonetheless.” Who remembers 2nd place? We do… now. WSD Moto built this bike from the ground up, and they decided early on that only the best parts would be used. “All the components that went into the build are TOP OF THE LINE! There were a lot parts that I initially made/bought for this build that I wasn’t 120% satisfied with so I replaced them with the best of the best. Some of the parts and littlest details took months to locate and/or finish. Everything that is on the bike now has been tested and proven to be the best performing and most reliable components out there!” The bike doesn’t just look new, it pretty much is. Nearly everything on the bobber is either new or has been brought back to better than new condition. “The only components that were previously used are the engine casings, engine cradle portion of frame, and wheel hubs. All of which were media blasted, re-surfaced and finished for this build. The motor is awesome and starts on the first kick!” It took WSD Moto just under 9 month in total build time to create this flawless bobber. “The bike is still new, as it has not been on public roads but the motor/transmission/drivetrain have been tested and function perfectly.”

To be honest, we are baffled that their are no miles on the bike. Could you resist riding the creation you’ve been building for the last 9 months?

The bike is currently for sale on Craigslist for a very reasonable $6500. [Big thanks to Ted at XS650chopper]