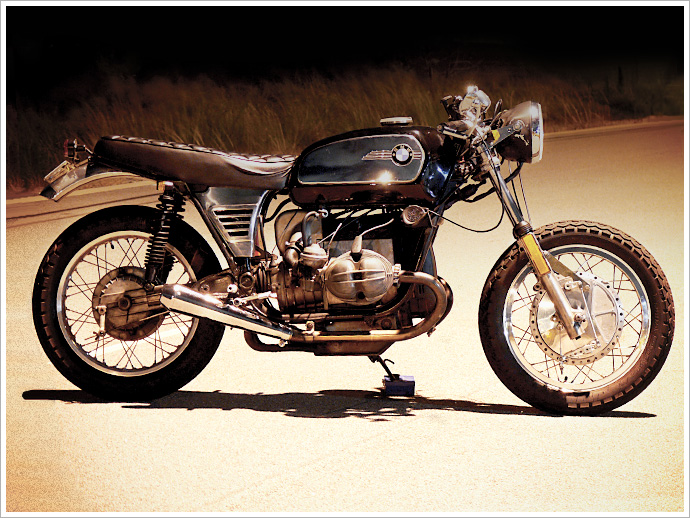 Here’s a encore bike from one Mark Byfield. He’s an owner/builder that caused quite a stir with his first bike, an faired ’85 R80 that would easily make our all-time top 10 list. This time he’s shaken things up a bit and gone with, erm, another R80. But has he ended up in a similar place? Hells no – for here we see not a beautiful, bare-bones faired racer but instead a caffed-out daily rider with a padded seat, a toaster tank, and some very exxy-looking front brakes. Mark seems to have a knack for making a lot out of a little cash and a large, overflowing bucket of DIY skills. Don’t you just hate him? Here’s the man himself. “It’s a 1980 R80/7 that i picked up from eBay. It was a good old touring rig with a big fairing and comfortable seat. Obviously things had to change.” “It was stripped down and the wiring was sorted out with the inclusion of an Acewell instrument unit. Anything non essential was dropped off.” “Next was the bodywork which entails a toaster tank bought from the states, a CB500(?) seat and modified rear sub frame. The rear wheel was then changed out for a /5 spoked unit and the front wheel for a TZ 4LS brake with and flanged rim. Classic tyres finished off the wheels.” The donor bike, replete with it’s 1970s “I can smoke a cigarette AND do the ton” screen

“The exhaust is stock apart from after market mufflers that give a nice loud burble. The controls consist of ace cafe bars and after market throttle and levers with alloy rear sets for the brakes and gears. Not particularly comfortable but makes for an engaging ride. It was a really fun build, except for the bit where I had to pay for the 4LS front wheel…”