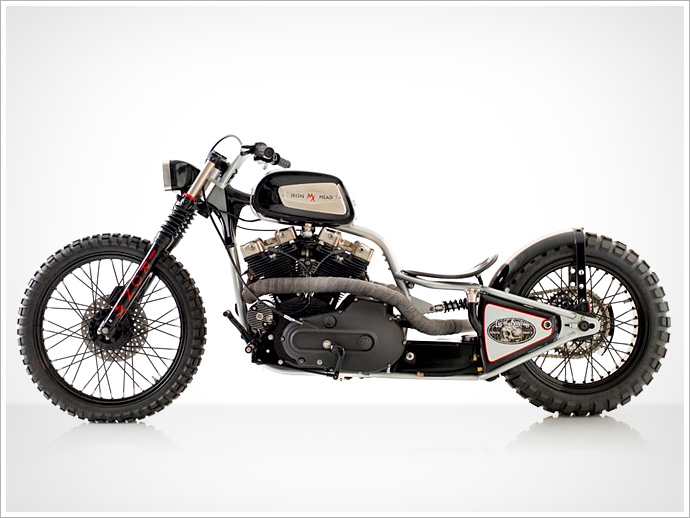 In life, you’ll see plenty of things that seem pretty good from a distance but just don’t stand up to scrutiny once you have a closer look. Take, for instance, cheap tools. Or your local politician. Or just about any film James Cameron has made. Similarly, custom bikes can sometimes look great at first glance, but upon closer inspection they just don’t impress. Well, here’s a bike that kind of reverses the equation. Now, that’s not to say that it’s crap from a distance. Hell no. See, what the latest build from Kevin Clarkson and the Boys at Lucid Customs in Calgary, Canada manages to do is to fool you into thinking it’s a rough-and-ready parts bin special. But get up close and, well, just take a look for yourself. Here’s Kev. “As far back as I can remember, I grew up around BMX, skate boarding, dirt bikes and custom cars. In my late teens I tried to wrench on anything I could get my hands on, from a 1964 Comet, numerous VW bugs to my dad’s beat up old Datsun truck; I had a passion to make them faster and different than anything anyone else had.” “The Iron MX was born out of a vision I had in my previous career as a software designer while working on a project at the 2010 ESPN Summer X Games. While watching one of the Moto-X events, I pondered the idea of a big twin in a dirt bike roller pulling a 50 foot jump and doing a tail whip. In 2011, after about a year of this idea ticking in the back of my mind, I started to do some looking at vintage hill climbers and some of the bikes being built at shops like Bling, Nash and Detroit Bros and the concept started to evolve.

Many months later I gave in to a 1980 XLS Ironhead that had been collecting dust in the coroner corner of my garage at home; one I picked up for a few bucks and just didn’t want to deal with.” “The 1980 Ironhead; an AMF-era Harley. They are generally bad news in my experience. Knowing a bit about what I was dealing with; an oil leaking, fix every ride, cheaped out on so called ‘Harley.’ We rebuilt both the top and bottom end on the 1000cc motor just to be sure.

Once we had a useable drivetrain, we started to fab up our version of a drop seat frame by chopping off the rear section about ½ way under the tank; it’s now a 6″ stretch from stock with a 19″ seat height so that the rider doesn’t feel like they’re on the bike; it feels like your actually in the bike.” “Getting it to a roller, we ordered a set of 21 and 18″ DNA wheels, powder coated the rims and spokes; and mounted Kenda’s new Big Block adventure touring tires (F 21/90 – R 18/150) to give the roller an aggressive dirt look.

For the gas tank, nothing other than a late 60’s Harley Rapido tank would do (thank you Detroit Bros). I managed to find three of them on eBay in a batch deal and snagged them with original functioning petcocks. The one we used is off a 1969 125cc with the stamped side plate. We installed a low pressure fuel sight glass and a pop-up gas cap, re-chromed the side plate, brushed them with scotch bright to knock down the bling and did a nice, clean medium metal flake silver paint.” “From there it’s a who’s who of ideas and concepts from other builders, bikes and late nights at the shop after too many beers. Custom made handle bars with inverted risers, internal throttle, Joker controls and $8 BMX grips. Also, there’s a custom oil reservoir shaped from split exhaust pipes to look like a dirt bike side cover/number plate; with a secondary reservoir for the filter built into the same box as the battery and electrical box.

For a bit of ride comfort we fabricated a pivoted shock system under the seat using a 6 inch mono shock off a mountain bike and, yes, it really works. Other than the front half of the frame, forks and drivetrain, everything on the bike is custom made.” “So far I haven’t actually jumped it or climbed any dirt hills, but it’s mean, nasty and by far the coolest bike I have owned/ridden. Special Thanks to Tim Atkinson for fabrication and design support, Dan Banister for the Photographs, Dave Baxter for the artwork, and my wife Teresa for supporting my often ridiculous ideas.”