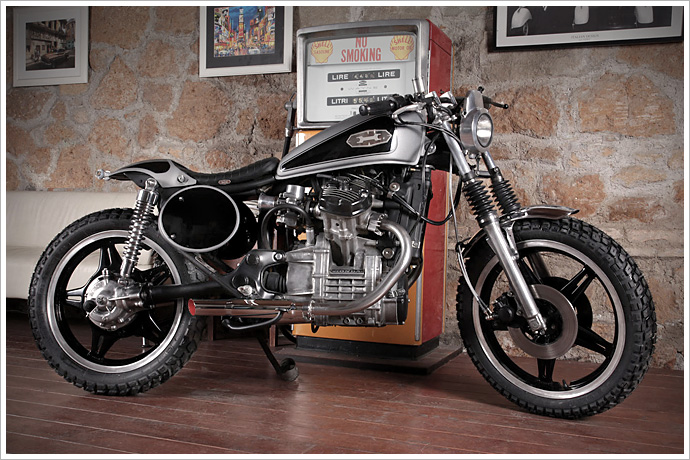 When it comes to creative Italian bike builders, the guys at Emporio Elaborazioni Meccaniche always bring something original to the table. For their latest build, they decided against using a local bike like a Guzzi or a Ducati and chose the humble Honda CX500. “We suggested this cheap bike to work with the customers request to have a cool but inexpensive custom” says Andrea. Back in 1978 when Honda first released the Honda CX500, they used the advertising tag line “First into the Future!” to launch this motorcycle – referring to it being the first water-cooled, shaft-driven V-twin. Now 30 years into the future, these clever guys from Rome have reshaped this Honda into a street tracker the Japanese would be proud of. The bike was quickly named ‘Testardo’, which means ‘hardheaded’ or ‘stubborn’ in english – because of the many problems they came across in the build process they thought it was appropriate. “This Honda CX500 was a commissioned project but the owner left us “hands free” to put our ideas and our design approach on the bike” say Andrea. “He asked us for something original, a short bike but with the possibility to have a small seat for his son.” This is where they came up with the idea of having a shorter more sporty looking seat that simply converted into a larger seat when the owner wanted to take his boy for a ride. The first problem they encountered from this hardheaded CX was the frame. “The frame was difficult because of its strange form, first tubular after boxed, thin tires, big engine and so on.” he says. “Our idea was a mix of a bobber (for a comfortable drive position), a scrambler (to have off road tires) with a touch of Triumph (the owner is a big fan)”. Their first attempt at the design looked too similiar to other CX builds they’d seen, so they decided to change their approach and put a more Emporio twist on it. “We started imagining the lines and we realised we needed a small but particular front end. We finally arrived at a 1984 Guzzi 350 Carter, it gave the right “spine” to the bike – so we started cutting and welding!”. The next problem they had to solve was creating that single seat that turned into a double when needed. They eventually came across a Triumph fairing which they used as the removable tail. “We reformed and cut it, then added it to the frame. It has a built in quick release which can be removed to reveal the hidden seat below.” The finishing touch was adding a couple of their trademark wrenches at the rear of the seat – nuts included.

This project may have encountered  a couple of challenges along the way, but these hurdles have forced Emporio to think outside the square, creating something we think is pretty special. What do you think?