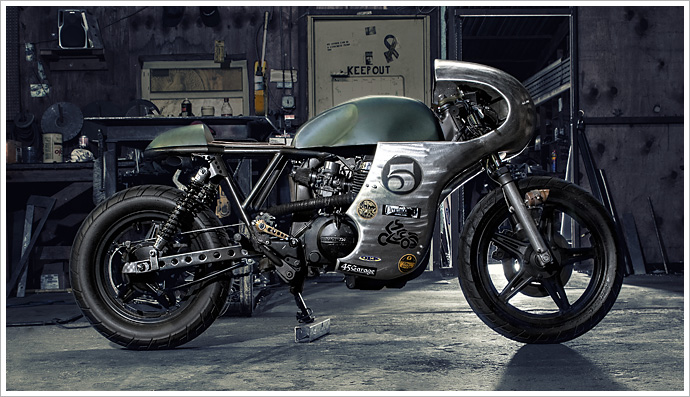 We’ve been at this whole posting-beautiful-custom-bikes-on-a-blog thing for a while now, and you probably won’t be surprised to learn that there’s not much we haven’t seen. Sex. Drugs. Rock ‘n’ (throttle) roll. It’s all old news as far as we’re concerned. But then, just when you think nothing could surprise you, a bike comes straight out of left field and knocks you for six. You see, this is the only bike we can remember that has appeared more than once on Pipeburn. And with some simple additions, it’s builder has managed to create something that’s changed so completely from where it was only four months ago, he had to correct us when we mistakenly called it his ‘new’ bike. Meet Retro Moto’s CM400, version two point woah. We began by asking Junior what he’d changed since we last spoke. “I the last four months I’ve built a new swing arm from scratch with a 3 inch extension, added some XR1200 shocks and changed the geometry to account for the heftier springs. I’ve also built an on-fork headlight that was rig welded with copper. And of course, there’s the fairing.” Junior was invited to The One Show in Austin and wanted to do something to really stand out. “With only 6 days to go, I worked like a madman and somehow got it finished the night before. It was inspired by 60’s racers and WWII fighter planes. It’s extremely light and totally functional; it was a real fight to ride at highway speeds before, but since this is my daily rider I wanted something to smooth it out and it worked perfectly. I also get a lot better mileage.” “I wanted a really round front, since most other fairings are more flat. I guess that was inspired by the nose cones of old aircraft. I set out to get the nose made from one piece of metal but I realized that the whole piece wouldn’t fit through the English wheel. There is at least 30 hours just in the nose itself.”

The process started with the hammer and a sandbag, and then shrinking or stretching the metal out to remove any marks. Then repeat. And repeat. And repeat. Apparently it took a lot of pressure and strength to get the compound curve of the nose just right. Junior also wanted it to be an all alloy affair, so he decided to go without a windscreen. “In my humble opinion, it flows better with the lines of the bike.” “We wanted it to look like it was doing the ton standing still. Originally, I planned an offset headlight but I couldn’t bring myself to cut a whole in the fairing.” Junior also pointed out that the number five on the fairing is for his wife, who (obviously) allows him to spend so too much time in the shop. He’s also applied the stickers, sourced from friends and local shops, as a hat tip to thank them. “The biggest lesson I learned was that even though I finished it on time, it kicked my ass. More time is always your friend.” To wrap things up, we thought we’d mention that Junior and Retro Moto will soon be the real, full-time deal. “I’ve recently been a part-time shop, but I am currently ramping up to be 100% by the end of the year. So there will be a lot more bikes coming out of Retro Moto.” I’m sure you’ll join us in wishing him the best of luck. Let’s just hope our eyeballs can stand all those extra doses of coolness.