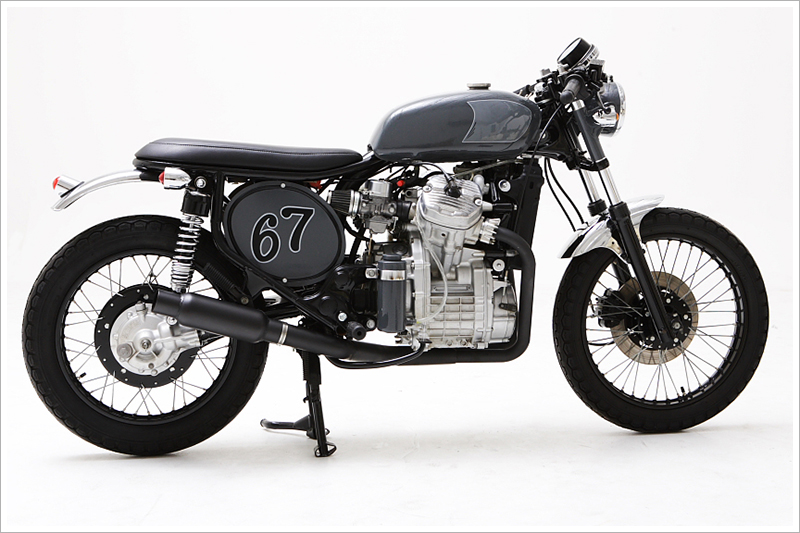 The CX500 has had a bit of a resurgence over the last few years. Bike builders have seen their potential as a low cost donor motorcycle that has a great looking, reliable engine. We’ve seen them transformed into café racers, street trackers and even the odd bobber. But they almost always have one thing in common – Comstar wheels. Thanks to their shaft drive, rear drum set up it makes it very difficult to change the wheels, hence the reason they usually have the stock Comstars on them. So when Jerry Swanson was given his brother-in-law’s non running CX500 ‘parts bike’, changing the wheels was one of the many things he wanted to do. But first, he needed to get the weeds off it. “My Brother-in-law gave me this 1981 Honda CX500 last year” says Jerry. “He bought another 1981 CX500 that was running and in decent shape, this was the parts bike that came with it. It had no tank, no seat, no title, bent handle bars, bent crash bars, broken blinkers, etc. It had weeds growing up through the frame and looked like it had not run in 20 years. I checked to see if the motor turned over, it was not seized. In fact it still had good compression, miraculously. My brother-in-law did not need any parts off the bike so I had myself a project, and a challenge.” Jerry has never been a big fan of the CX500 in stock form. “They are rather homely” he says. “But, the motor looks really cool and I had seen a couple fixed up and knew there was potential. So I started by removing all the ugly from the bike, and there was a lot. I had to strip it down to the frame and wheels before I get envision the direction I wanted to go. Even then I was put off by that ugly jog in the frame under the seat. It ruined the lines of the bike I wanted to make. So I cut off the seat loop/ shock mounts and built a new tail section. Then I could see the bike I wanted, a vintage inspired cafe racer style custom bike.” Jerry sent the improved frame off to get powdercoated, cleaned up the motor, replaced a couple gaskets, and also powdercoated the stock Comstar wheels. “When I got all the parts back I mounted new vintage style rubber and began putting the bike together. After I had the bike in roller form I couldn’t deny the fact that the wheels were really not working for me. Actually I hated them. The whole project was on hold until I found a solution to wheel problem.” So Jerry wanted some classic spoked wheels but he couldn’t find any to fit the unique CX500 rear set up. “So I came up with a simple solution” he says. “I created an adapter ring that bolts onto the stock CX500 Comstar hubs and allows you to mount a spoke rim of any dimension you like”. Jerry now sells these spoke rings to other CX500 owners wanting to change their Comstars to classic spokes on his site MotoSynthesis.com As soon as Jerry mounted the spoke wheels to the CX500 the planets aligned and he found harmony at last. “The rest of the build went smoothly” he says. “I replaced the wire harness, lights, coils, and battery for reliable trouble free riding. I rebuilt the carbs and built a custom 2 into 1 exhaust. I used a vintage dirt bike tank to slim down the bike a bit. I made a slim two up seat to fit the custom tail section and covered it with black vinyl. I applied the two tone grey paint myself to finish it off.” This build may have started out as a garden ornament, but Jerry has transformed it into one stunning and understated CX500. The slim tank, paint scheme, side numbers and of course the spoked wheels, all help give it the classic look Jerry was after – and he couldn’t be happier.