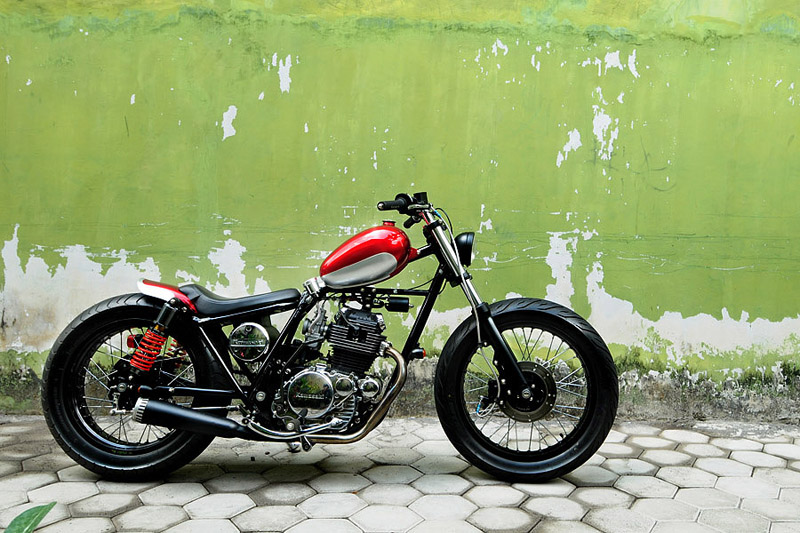 Imagine not being able to afford to buy any type of motorcycle. Not even the rustiest, crappiest, lowest of the low displacement bike that you wouldn’t even play wee-wee firemen with it if an English rioter had agressively flambéd it. Then imagine living in a country that has a very limited selection of bikes. Then imagine (stay with us here) you have a dream to become a great custom bike builder. What do you do? Well, Agus Darizt from Java, Indonesia faced this problem a few years ago. So he worked out the only thing he could afford to customize was small scale model kits. He got so good at handling the super glue and plastic a friend asked Agus whether he would be interested in building a real bike for him. Of course he jumped at the chance and he hasn’t looked back since. “I started from scratch,” he says. “I learnt how to weld, how to use a bench lathe machine and refined my metal shaping techniques, and 5 months later the Preambule Orange CB100 (pictured below) was finished”. Now three years later and Agus is up to his ninth bike, or “attempt number 9” as he humbly calls it. First build! Did someone say it’s a honda cb100?

We’ll let Agus give you the brief rundown on his latest creation. “The 9th attempt base is a 1981 Kawasaki Z200. I started building in early June 2011 and it was recently finished in August 2011. Almost total modification from the original frame to extend the wheel base front suspension is from Yamaha Byson, and the rear is from Daytona. The tank is taken from some old motorcycle from the junk yard – my best guess is from an old Zundapp. The exhaust pipe, handle bars, saddle are all hand made. Forward control and footsteps are made from bicycle’s crank and bottom bracket. There’s also some parts that I’ve taken from bicycles, like cable and cable holder. The paint job was done in my small garage.” “To boost up the performance, the cylinder head was bored up and replaced the piston with the bigger size from some 80’s Honda Civic. Excellent. The carb was replaced with Mikuni 32mm and I upgraded the ignition and all the wiring.” In our humble opinion, Agus has created exactly what he was striving for: a unique piece of rolling art that is distinctive in his own Darizt style. It may only be a Z200 but it’s definitely batting out of his league – just like Darizt. There’s only one thing we wish we could see… and that’s his next “attempt”.