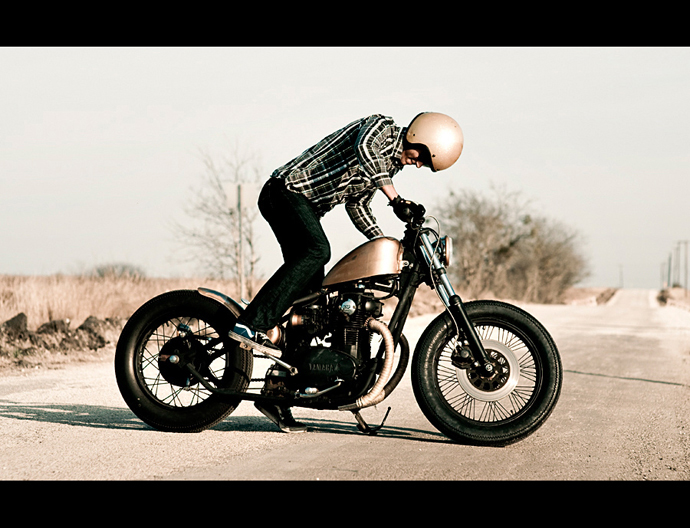 This is a story about a young man named Cassio Silva who fell in love with a bobber sitting outside a tattoo shop in Texas. “That same day I went home and spent hours researching how to build one for myself” recalls Cassio. You see, this 20 year old had never even ridden a motorcycle, let alone tried to build one. “I’ve been building and modifying cars for years and knew i had the skills to take on the project” he says. After finding a suitable XS650, Cassio took the bike home and within days it was cut in half in his garage.

The entire bike was built on a tight budget, not because Cassio wanted it to be cheap but to show that this can be done by anyone, with any budget, and almost any experience. The hardtail is a pre made unit made by TC Bros. “It stretched the bike 3 inches, making it very comfortable for my 6’3″ body” he says. “The bike originally came with a 16in wheel that i swapped for a 18in from an older japanese bike. Wheels were wrapped in 450 rear and 400 front Firestone replicas. The velocity stacks were a NOS part off ebay and really one of my favorite things on the bike. The seat is a West Eagle and uncovered, keeping with the raw theme. The lights were ebay items that I then took apart for some paint. The rear fender is the stock front one that i cut up to save some coin. The entire bike was painted with rattle cans.” After working hard on the build for a month, the bike was almost ready to hit the road. There was one small problem though, Cassio didn’t know how to ride it. So in the same week he finished the bike, he took a motorcycle class and got his license – talk about a ‘crash course’ in motorcycles. [The beautiful photos were taken by a photographer named Banzai Steve. You can check out more of his work on his Flickr page and blog.]