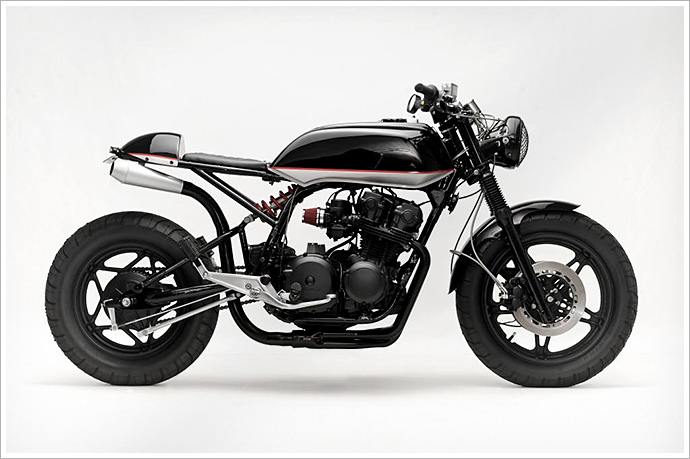 Yes, you are on the right site. And no, we haven’t suddenly decided to add four wheeled vehicles to our stock-in-trade. That’s because the convertible we happen to be talking about here isn’t a little red Corvette or your daddy’s Thunderbird, but instead it’s the latest build by Florida’s Steel Bent Customs. This Nighthawk not only ticks all the right boxes in terms of clean lines, cool pipes, and sweet paint – it also manages to be both a café and a brat at the same time. Cool trick, huh? Mike Mundy, owner of Steel Bent Customs, has a simple plan. “I will build 15 to 17 bikes this year. 12 or so will be commissioned, built to order bikes – the others will be personal shop builds to allow us to express some creativity.” This is the first of these builds, and by the looks of what he’s created, it won’t be the last. Mike wanted to create a center, or ‘cat’s butt’ (as he put it) exhaust bike. “We didn’t know how to expect the exhaust to sound or if we even had ample rear tire clearance.” Turns out that the set-up is good on space and the exhaust tone is very similar to your average 4-in-to-1 set-up. He also wanted to do a mono shock out back without switching out the rear swing arm. Tick and tick again, we’d say. “Once we were moving along with the build we decided that we liked the look of the seat cowl, but wanted the option of a space for a passenger. Hence the ‘Convertible’ name,” Mike says. The guys then had their upholster give them a diamond stitch pattern on the two seats, and their painter finished off the tins in a wet-look gloss black and silver design with a red go-faster stripe. Then, when most of us would be happy with creating a bike that simply crossed two genres, Mike still wanted more. “We went with a motocross bar set up and added a screen protected headlight for a look we are coining ‘urban cafe’ – ready to assault the city streets.” Assault the streets and then sip a nice latté, we’re guessing. For the final touches, red pod filters and mono shock springs give the bike a little attitude. Mike notes that although the bike was inherently an ‘inside job,’ the new features and unique details will allow new customers to see more options when detailing their own builds. Mike ends by pointing out that she was purchased by a guy overseas before she was finished and that they will be shipping her out soon. How’s that for an endorsement? We’re guessing that if Mike and the lads can keep this up, it won’t be just one ‘guy overseas’ who wants a part of the action. I wonder if they ship to Sydney?

Photography by the talented Erick Runyon