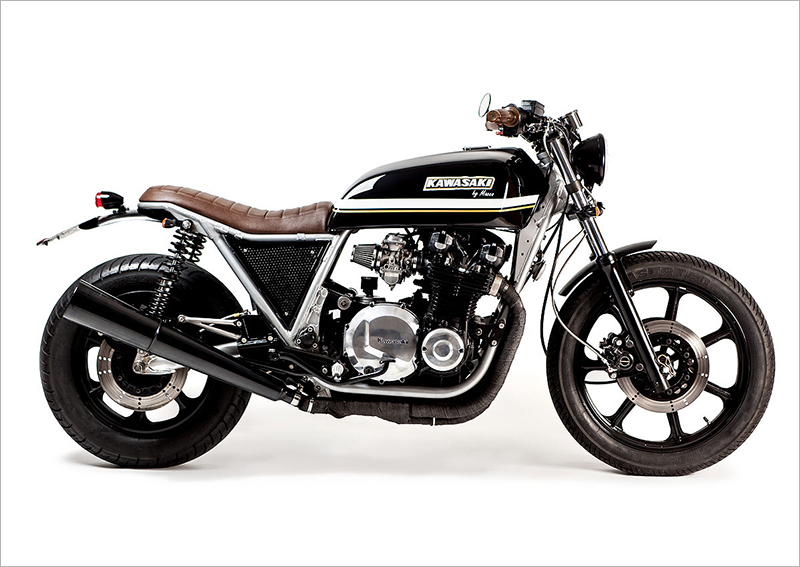 Some families are close. Sometimes family gets together to start a business, or to work on motorbikes, or to just hang out. Today’s feature bike is a product of all three of these, and as the first build, this custom workshop is off to a great start. Maccomotors is a family based operation, with two brothers working out of a shed in Chiclana De Frontera, Cadiz at the base of Spain. This is their first build, the ‘Big Z’, a customised 1982 Kawasaki Z1100ST, built in a small workshop, by two brothers armed with big passions and great ideas. Picked up for cheap from a neighbour because it wouldn’t run, the big Kwaka’s motor was stripped down and found to have valve issues. At this point it was decided to completely rebuild the engine, and adapt the exhaust to run a set of pipes from a Kawasaki Zephyr 1100, ending in MIVV exhaust silencers. The factory aircleaner has been ditched for a set of Meiwa pod filters, giving the inframe a nice clean look. For looks, Maccomotors has gone for mix of street tracker and café racer styling. The brothers decided to run with the lines of the fuel tank, a Maccomotors leather seat following the tank’s curves beautifully but kicking up towards the rear of the bike. The rear frame has been cut down to accommodate the custom seat, a Texas tail light fitted, and a set of SHIN-YO cateye indicators flanking the rearend. Inhouse fabrication is one of Maccomotors’ specialties, the front and rear guards being manufactured in the tiny workshop in the south of Spain, as well as additional steel and aluminium touches peppering the bike. From the Bates headlight back, the bike has many touches that talk more of quality of thought put into the build, without being too flashy. A set of Renthal ultralow handlebars have been fitted, ending in Beston style grips, a single speedo fitted for simplicity. For quality of ride, a Marzocchi E81 has been fitted to the rear suspension, with Metzeler tyres giving grip to match the power put out by the 1100, 19” at the front, 16”at the back. Built with the idea of possessing functionality, retro styling, yet have an aggressive persona, Big Z definitely fits the bill. According to Jose, one of the Macco brothers, the bike is a “real rocket” to ride, adding “we have big ideas we just want to share with people as bike crazy as we are”. And with more bikes in the process of being built, keep on eye on this small family outfit, because if they can do this on their first build, it’s only a sign of more good things to come.