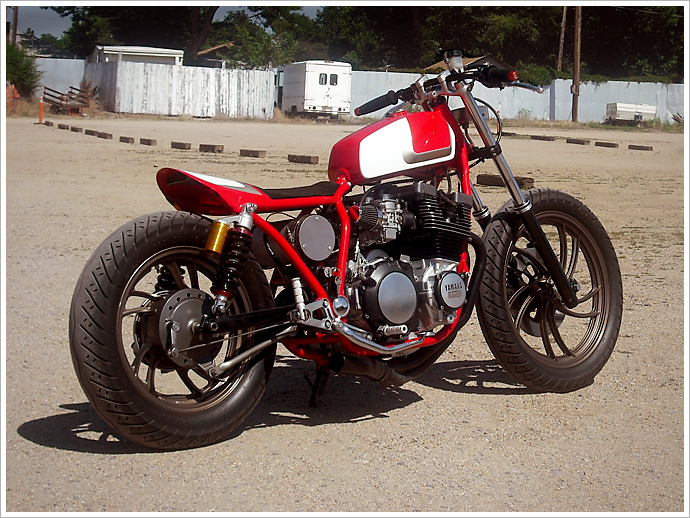 Some of you will have seen Roland Sand’s recent custom job on a Ducati Desmosedici RR where he took that undoubtedly very cool and expensive super sports bike and made it into a very different type of very cool and super expensive bike. Sort of like taking a lump of gold and making it into a different sort of, erm, gold. Well that’s all well and good, but what really impresses us is the rags-to-riches type of custom alchemy that you find from time to time. The kind of transformation where you see a bike you previously thought of as a bit lame and embarrassing being transformed into something that is cooler than cool. The build that stands out in our minds is John Ryland’s Reciprocity Virago. Until now, that is. The bike you see here is the result of some serious talent being applied to one very uncool Yamaha Maxim by a guy called Chris Tschiffley and his dad. Nothing like setting the bar really high and then sailing over it like you’re not even trying. Nice work Chris – and hello Roland if you’re reading this… Come in Mr. Tschiffley… “For as long as I can remember, I’ve had an obsession with just about anything automotive. I’d have to give thanks to my dad for that, who has been building bikes, flat bottom boats, and hot rods since the sixities, and has always had some sort of project going on in the garage. Dad always took my brother, sister and I to the drag strip, stock car track, and a couple Indy Car races, and we would never miss a Formula 1 or Moto GP race to this day.”

“As a kid, this got me into building model cars, collecting Hot Wheels and die cast cars, and spawned my addiction to car magazines. In lieu of sports in school, I raced karts with my brother, which we actually started in the early 90’s, running OHV 4-stroke Briggs & Stratton motors, Yamaha KT100 2-strokes, then, into purpose built Italian 125cc Shifter karts.”

“The rush that karts gave me on the track made me want the same on the street, but with the cost of fast cars being far beyond my personal means, I knew motorcycles were the only answer. At the time, my mom had an old Honda CM400 in her garage that never moved, so I started tinkering with it. Rebuilt the carbs, bought a battery, and started buzzing around the side streets.”

[superquote]“…something that would rev to the moon, and scream like the Millennium Falcon.”[/superquote]

“Fast forward a couple of years, and I decided it was time to get a bike of my own. I had always been into Moto GP, and loved the sound of v-twin Ducs and high revving 4’s, but I hated the idea of riding another cookie cutter crotch rocket. I began to imagine something that would rev to the moon, and scream like the Millennium Falcon, so a dual overhead cam four cylinder seemed like the most obvious answer. At first, I just wanted a ride that looked unique and was respectably quick, but as an engineering student in college, I planned to ride it to and from school every day. Considering my limited budget, it had to be cheap, so I hopped onto that popular, free classifieds website and the first bike I found was a 1982 Yamaha Maxim 650, listed at $600. We went and checked it out, and it seemed to be in decent shape, although it had not been started in over 3 years. After some negotiating, we left with the bike for a mere $300.” “The moment the bike rolled off the truck, I started removing all of the 80’s funk, and chopped the rear hoop just behind the shock mounts. My initial plan was to give it a quick chop, build some new handlebars, disassemble and repaint everything, and get it on the road. But as soon as the fugly tank and seat came off, I start playing with ideas. We had a few cool gas tanks laying around the garage, and one completely fit the style I had in mind, but required the reconstruction of the main backbone of the frame. After imagining the finished bike, I just couldn’t settle on the quick chop idea, so we just rolled with it. Styling cues were mixed and matched from various bike styles, as I wanted something that was totally unique, and couldn’t really be placed into a particular style category. I chose some cues from flat trackers, which inspired the low, duck-tail rear “fender”, which is hand formed sheet metal and integrated into the frame tubes. Cafe racers touches are represented in the tank and hand built “clubman” style bars. Ducati’s have always been one of my favorite bikes, and the 888 inspired the super bike-style number plate on the tail piece. Then I looked to the hot rod culture for paint scheme ideas, and loved the concept of a multi-tone design.”

“My dad and I worked eight slow months over evenings and weekends, and finally finished fabrication. My brother Josh contributed with an awesome, custom machined gas cap, TIG’d up a one-off license plate mount, and did great on the suede upholstery for the seat. Dad did a stellar job on the paint, and I finished up the bike with the wiring. It started up on the first try, and a little carb tuning is all it took for the bike to run like a champ.”

“Once on the road, it never gave me any problems, and is a joy to ride. The new rear shocks are a bit stiff, which is magnified by the removal of about 60 pounds worth of nonsense overall, and I would say that it’s the only issue related to rideability. We didn’t build this bike to be a canyon carver, but it does handle pretty well despite the soft air-forks and stiff rear end, and I am happy to say it’ll eat Harleys from light to light. If I were to do anything different, I would consider upgrading the forks and front brake, but considering its more of a cruiser, I haven’t seen a need.”

“We now have a few more projects currently in the shop, both personal and customer bikes, and have since sold this one, but only to move onto new projects and buy more shop equipment!” We see a lot of bikes here. And I mean A LOT. But maybe the ultimate accolade to Chris and his dad’s work is that instead of writing this piece in good time, I’ve actually been surfing the web classifieds for cheap XJs. And there’s heaps out there. Good ones for not much money. Hmmm. I’ll be right back…