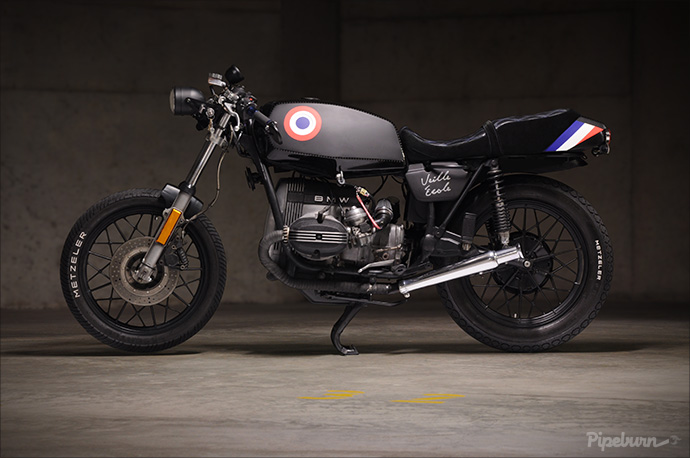 Here’s something you may or may not know, depending on your own, personal level of smart-ass-ed-ness. The current BMW logo has been developed over many generations of refinement to the point it’s at today – the familiar circle divided into blue and white quadrants. But do you know where it started? Here’s where; as a white spinning propellor against a blue sky. That’s right, a propellor. Motorcycles were essentially a sideline for the company after the treaty of Versailles banned Germany from making arms in 1918. Talk about making the best out of a poor lot. So almost 100 years later we find ourselves in Sydney with a Frenchman pondering just how to trick up his ’83 R65. Then in a moment of divine inspiration, he realises exactly what he should do. Behold the world’s first BMW motorbike decorated in the colours of the French Airforce. Vive la différence!

Can you introduce yourself ?
My name is Pierre Geromboux. I am currently living out my mid-life crisis in Sydney’s North West. I work in Medical sales.

What Kind of BMW is it?
The bike is a 1983 BMW R65. I have called her “Veille École” which means “Old School” in French. When I purchased the bike it had been sitting in a garage for 5 years. The owner had started with an engine rebuild but the project had stalled there. With the help of my good friend Andrew from Ramspeed we stripped the bike back, gave it a Radical Fenderectomy and resprayed everything. Powder coated the wheels black. Used two tone Gloss and Matt black on petrol tank. Fitted drop down bars, Pod airfilters, Twin headlights & LED indicators. Replaced original instrument display with digital Tacho & Speedometer. Custom cross stitched leather and suede seat. Carbon fiber covered battery (still weighs the same!). Wrapped pipes with new stainless steel slip-on trumpets. Graphics by Joey at Motographics. Next step bi-turbo! Did you do it all yourself?
I had a mechanic friend help me with fitting the drop down bars and I had to get electrical help when I took off the original instruments and was replacing the generator warning light. Even when we identified this as the problem for the battery not charging and completed the circuit with a resistor, it still would not work. The final solution was setting up a small LED generator warning light under the digital display. All the seals and bearings were replaced, as well as the carburetors rebuilt. The bike is now tuned to perfection and runs reliably. What’s she like to ride?
I try to ride every weekend. I have done the Putty Road up to Singleton. All through the Blue Mountains. Down to the Royal National Park or sometimes just the coffee run up the Old Pacific Hwy. The beauty is in simplicity of the mechanics. There are no electronic management systems. You get feedback by using all your senses. Checking the oil by using a dipstick. Listen to the engine note and hear how she is running and when to change gears. Smell the oil when the engine gets to temperature and you know it is time to open the taps! The bike is very torquey and gets off the line well. It has quite short gearing and revs out quickly. Top speed is probably about 140khm? That’s what the speedo said anyway. I will try to get it on a Dyno at some stage. What other bikes have you owned before?
My first bike was actually a scooter when I lived in Paris age 19. I will never forget coming around the Arc de Triomphe onto the Champs Ellysee with six lanes of chaos around me. I then had a Honda CB250 before lapsing into car ownership. I got back into bikes last year when I saw this old boxer engine needing to be brought back to life. What is a Frenchman doing riding a German bike anyway?
Revenge for WWII. Favourite BMW and other bikes?
My favourite BMW is easy – it’s the 1934 BMW R7. Otherwise I would be happy to park anything that appears in Pipeburn in my garage. What’s your workshop like?
It’s a pretty standard two-car garage, but with a bike instead of the second car. There’s a quality socket set, a BMW tool set, some painting and polishing stuff – and I have a bike lift so I can get in and work under the bike. If she was a movie, which one would she be?
Dambusters.