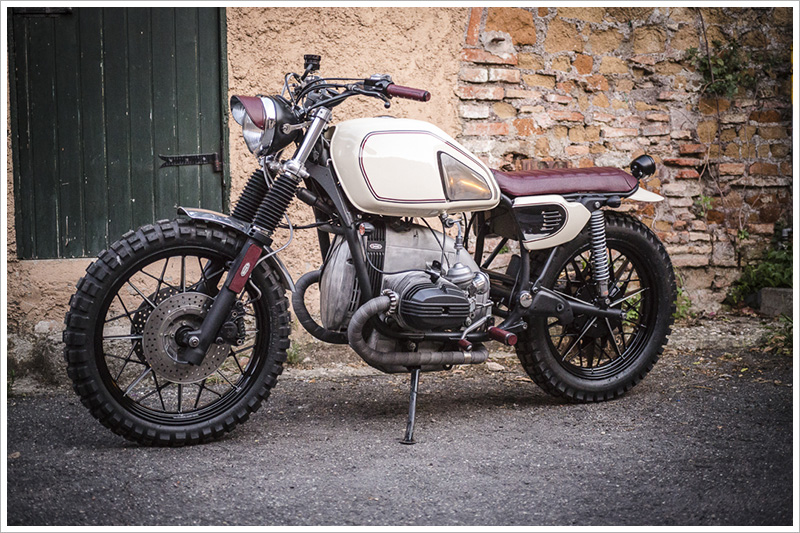 We love the scramblers coming out of Europe at the moment. The latest is this BMW R80RT built by the talented brothers at Emporio Elaborazioni Meccaniche named ‘Carnera’. To most of us this name doesn’t mean a thing, but to Italian’s, Primo Carnera was one of the greatest boxers Italy has produced – winning the world heavyweight championship back in 1933. “We named it after him because our bike is a big, elegant and like him, it has a boxer engine too” says Andrea. The bike was commissioned by a customer from Tuscany whose brief was simple “create an elegant and bad ass vintage enduro.” Well, we think they’ve built a knockout Beemer. Emporio Elaborazioni started the build with the rear frame which was chopped and shortened to give the rear tyre greater visibility. Then they worked on the large stock tank. “We don’t like this trend of using “boxy” big tank on a slim seat so we cut, and curved it to make the tank more minimal and follow the line we designed.” They also added a couple of nozzles and transparent fuel lines to make a visible fuel level on the tank – the external version of what they did with the Mastino XJR 1200. The seat was then custom made to follow the curve from the tank, then covered in Italian burgundy leather. They really wanted to add some special details to the build. So to add a touch of “vintage” they modified a set of Ducati GT side covers, that look right at home on the bike. In their search for other details, they worked with a leather artisan who added all the leather details to the foot rests, the hand grips, the top of the headlight and the leather insert on the forks. The classic lucas style headlight has been modified to insert the tachometer in it. The big headlight switch it had, has been turned into a engine kill switch and the actual light switch is on the handlebar. The headlight brackets are two wrenches which they seem to add somewhere to all their bikes – because the wrench is part of their logo design. Other modifcations include new enduro handlebars, new brake pump, throttle and aluminium mudfender.
“We closed the air filter with a metal cup to improve the engine design and also put the key lock on it.”
To co-ordinate the fuel pipes with the tank level they used transparent tubes again with an aluminium filter. All the electric parts, which used to be housed in the big stock headlight, have been relocated to under the seat. To finish the bike off and give it a more enduro style they opted for a 2-in-1 exhaust with an artisan muffler which was designed on an old Ducati scrambler type. Then finally the bike was given the stunning vintage themed paint job, using ivory with red and black pin stripes. The guys at Emporio Elaborazioni have ‘pulled no punches’ building this sensational bike. They’ve turned a bulky stock R80T touring bike into a very classy vintage scrambler, which we bet will get the old men along the streets of Tuscany telling stories of their past machines.

[Photography by Simone Giorgi at Fotografo]