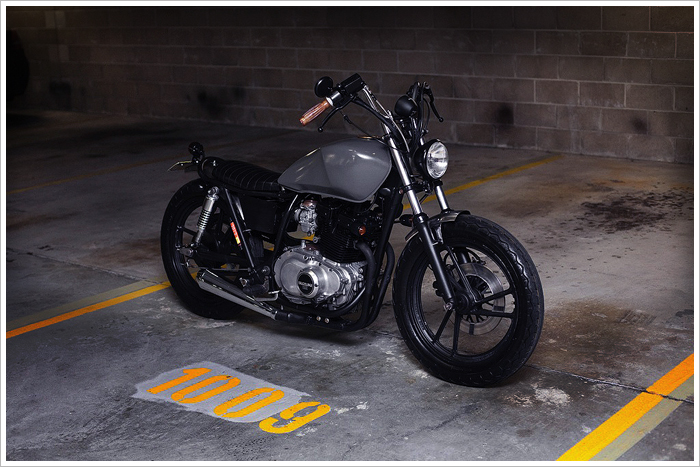 Most of us have motorcycle moments that happen when we are younger that are etched in our memory forever. Moments when you first say to yourself that “one day I will buy a motorcycle like that”. I had one of those moments when I was about 9 years old. I was in the back seat of my dads old Ford Falcon on a family holiday road trip to the Gold Coast when we were overtaken by a guy on an extremely loud Triumph Bonnie with one of the most beautiful girls riding pillion. In slow motion they rode past and I swear the girl blew me a kiss – I may have embellished this moment slightly over the years. Whatever the case, the memory is still so vivid. The British racing green tank on the Bonnie glistened in the sun, even more attractive than the blonde that was holding on for dear life. Around the same time, but in another country, a young Karl Reynolds also had one of these moments – just replace the cute blonde with some New Zealand farmers (bad visual?). “We used to go on holidays every year to an NZ coastal town called Pauanui” Karl says. “These local farmers ran a mini motorbike track where you could hire one for 10 laps. My first ever ride was on one of these, in a straight line, into a wall of hay bails. Took me a few goes to learn about something called steering. Ever since, I knew I’d own a bike one day.” And this is the bike he’s been thinking about since then… We’ll pass you over to Karl to share his story about building his first ever bike – this little bratstyle Suzuki. “After riding around on scooters in London for years, I moved back to Sydney and bought my first bike. A 1984 Suzuki GSX 250, already customised with a cafe racer vibe. After spending loads of time reading mags, blogs and forums, I discovered Bratstyle.com & Heiwa and became worryingly obsessed with Japanese customs. That was it, I knew what I had to do. The bike was being stripped down and rebuilt with a new style. So it began. I had no experience, no tools, no workshop. Just loads of enthusiasm. My (legendary) parents agreed to let me use their apartment carspace as a workshop. And my (amazing) wife allowed me lots of man time to do it. So I borrowed what I could off mates and grabbed all the basic tools I needed. And bought a Haynes manual. Stripping everything down was too much fun, I made sure the iPhone was close at hand so I could document and label everything. Then the cleaning and paint removal began, which took a long, long, long time. Many pots of stripper and quite a few wirebrushes later, everything was bare. The frame needed a loop welded to the back so I could mount a fender, and a new petrol tank fitted. So off it went to a guy who builds film sets for a living for some welding. (Thanks to Jay and Chris at SMW for hooking me up. And for letting me explore your spare parts shelves for hours every weekend). Once the frame was back, it was time to mock it up. I ordered a lot of aftermarket parts from Japan – including the Hurricane 140 forward up bars that were inline with the style I was looking for. I was like a fat kid in a cake shop every time a package arrived. I had no previous experience working with metal so learned a lot after having to build a battery box and fair few little mounting brackets here and here. Eventually, all the parts fitted, safely, and I had a mock up of a semi-finished bike. Time for paint, so all the parts came off again. That’s when the fun police stepped in. A few residents obviously saw me cutting metal in the wee hours of the morning in the car park so said something to the building manager. He asked me to remove everything over the next few days. Perfect timing, seeing as the bike couldn’t be any further from being an actual ‘bike’. So my old man helped me move everything up to my new workshop – their balcony. The journey continued. My workshop was a great talking point for family guests having sunday lunch in the middle of it. I eventually got all the parts for paint down to the carpark ‘paintshop’ without being seen. Painted as quick as I could and then got everything back up again. Seeing old parts come to life again with some new paint was super satisfying. Once everything was dry, it was time for final assembly. This was probably the most enjoyable part, seeing what you had in your head finally come to life. Everything was going fine until I got to the electrics and battery. As I connected the harness to the battery, the starter immediately kicked over, whilst my family were watching Two and a Half Men. Everyone shat themselves and I decided the job was better finished by someone who knew what they were doing. So away it went – off the balcony, down the hallway, into an apartment lift (hilarious moment), off to the local shop.” Karl finally got the bike back three months later. Picking it up was “a very epic moment” he says. After waiting for so long he couldn’t wait to get her back on the road. Since then, “she’s been running great and I ride it in to work most days”. So next time you ride past that kid on the bmx who is admiring your bike from the sidewalk, you never know, you might be creating a future rider for years to come.