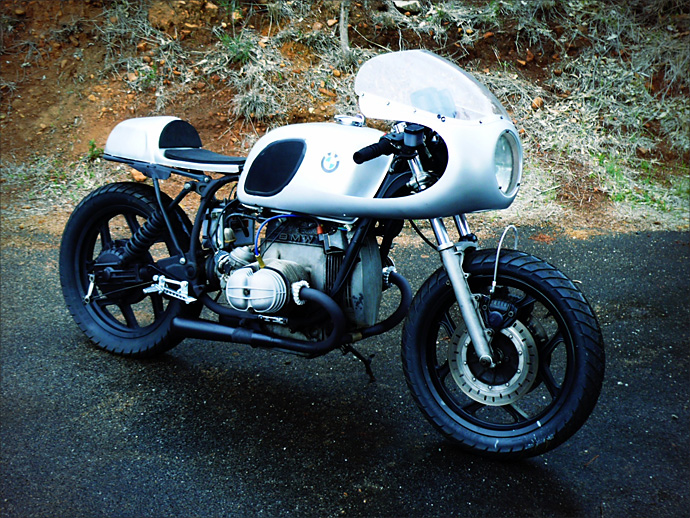 As a hobby you’ve got admit that motorbikes are, all things considered, relatively cheap. It’s heartening that in this day and age you can still rock on up to your local Ducati store and buy an Italian two-wheeled Ferrari for a lot less than US$20,000. In fact the advertised price for Ducati’s top-of-the-line 1198 SP racer in North America is only a smidge under US$22,000. In the scheme of things, that’s a silly small price. A 2011 Ferrari 458 Italia would cost you ten times that amount, and I doubt that any of us would be willing to choose a single car over 10 new bikes – let alone 40+ second hand or vintage bikes.

Which brings us rather neatly to this little gem, aka Mark Byfield’s cafe’d 1985 BMW R80. With nothing but a bunch of hard work and a cash outlay of less than five Aussie grand, he’s managed to create a bike that looks like a million bucks and which rocks our boat a lot more vigorously than any four-wheeled Italian poseur-mobile ever could. Over to Mark. “I just had my 40th birthday. I work in the offshore oil industry, drilling exploration wells for various clients in various locations all over the world from our semi submersible drilling rig. It’s usually pretty good fun and engaging. I’ve been riding bikes, both motorbikes and pushbikes, since I was about 4. I raced motocross and downhill mountain bikes up until about 3 years ago. Still ride a bit of enduro on my Husaberg 501; it’s a great bike.” “I got interested in building a bike a few months ago and always loved airhead beemers, and a cafe racer seemed like the perfect way to go. The bike started out as an ebay bargain 1985 R80. After I picked it up, I did the usual strip, clean and rattle can routine, giving the frame, wheels and swingarm the flat black treatment.” “As I wanted to fit the Ducati-style single seat, I had to cut down the subframe to fit the shorter seat unit. Not an easy task with my dodgy welding skills! I also sourced the cool ass /5 tank from ebay US and gave it a sand back, a new paint job and badges. The Ducati style fairing and rear sets came from Flatracer in the UK. The fairing got a final clean-up and got the same paintjob as the seat and tank.” What is it that makes BMWs look so good in fairings?

“The only other real mods where the exhaust, which is a custom job welded up by me made up of assorted spare parts that were lying around, and removing everything that is not absolutely necessary. The final effort was a service and tune and I was off, It goes really well and is an absolute blast. Sounds like a tractor and goes like a train!”