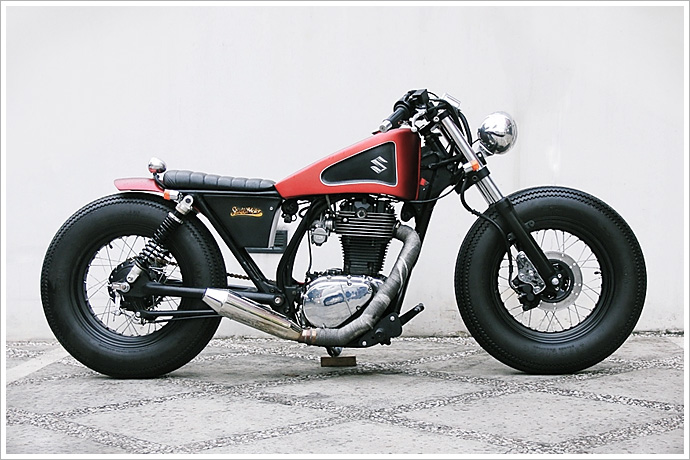 It’s amazing what you can do with limited resources and a whole bunch of commitment; that’s got to be the mantra of Studio Motor’s Donny Ariyanto. He’s a builder that’s based in South Jakarta, and if there’s anyone in the world that will be able to make a mountain out of any anonymous, out-of-favour, ill-advised motorcycling mole hill, it’s this man. In the past he’s worked miracles on Yamaha Scorpios and Suzuki Thunders, but we’re thinking that he’s really outdone himself this time. Feast your eyes on Studio Motor’s latest single cylinder miracle, the “Naughty Red.” The bike was built for a customer who works as a film director in Jakarta. His brief was decided upon after much surfing and some close study of the city’s custom bikes. It was as clear as it was tricky. “I want to have a custom bobber that is simple and practical, but it should also have a bad ass, naughty streak.” The Studio Motor lads began by stripping, overhauling, and re-assembling the bike, with a follow-up of powder coating and polishing for the core elements. They then fabricated the bike’s tank, seat, rear fender, and battery box themselves. As we’ve learnt in the past, the Studio boys like nothing more than pummelling metal, and will do so at a moment’s notice. They finished it off with a Sikkens matt candy apple red. Next came a new set of forks, custom triple trees, and custom rims paired with a set of inimitable Firestone Duluxes. A bespoke swing arm was added to give the bike a more muscular stance, and a Keihin PWK 41 carby was used to replace the stock fuel atomisation set-up which, when combined with the Flash custom muffler exhaust, apparently makes quite a pleasant roar when so provoked. And, yes, it has pipewrap. Donny says that there was a lot of lessons learnt from the engine rebuild on the bike, but obviously the end result was well worth all the bother. Apparently the client couldn’t wait to ride it to his next shoot. And could you blame him? Lucky bugger.