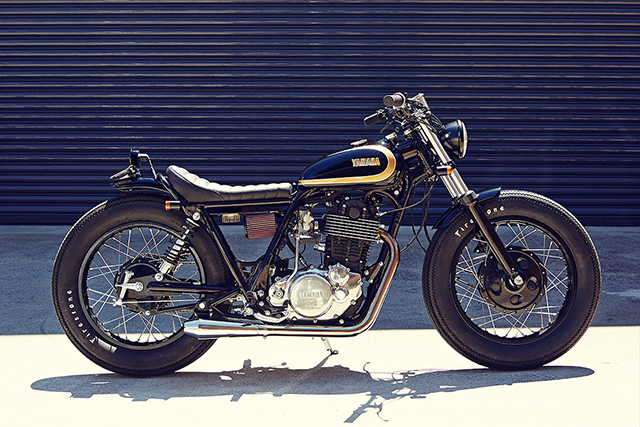 When it comes to building a bike, an open brief is always a good brief. It’s nice to know someone puts their faith into the fact you will get it right. This is exactly what happened with the latest build to roll out of the Salty Speed Co’s workshop. Starting with a 1988 Yamaha SR400 with only 6500kms on the clock, the whole bike has been stripped back and reworked, giving a fresh new look to this bulletproof thumper.

Utilising the classic single for the build, Matt from Salty Speed Co decided the engine needed no work, and to focus on improving the aesthetics of the machine. The first aspect that needed to be touched up was the stance. Taking inspiration from the SR bikes coming out of the Bratstyle workshop, the machine has had the stock rims powdercoated in black, laced with stainless spokes and wrapped with 18 inch Firestones.  At the rear a set of customised Ikon Basix shocks have been fitted, rebuilt to 265mm. To change the ride height at the front, a set of damper rod spacers have been fitted, along with progressive springs. This has brought the bike’s ride height almost three inches closer to the deck. To accommodate for the bike’s slammed stance, a new rear hoop was mounted up to the frame, and the rear fender mounting modified. Even the custom electronics tray had to be notched, to allow for clearance for the rear tyre. Once the fiddly bits were sorted, the frame was detabbed and gussets fitted, and the whole lot powder coated in gloss black. Sitting proud on the bike is a Yamaha GT80 fuel tank, once an ornament on the shelf at the Salty Speed Co workshop. A quick sandblast on the tank revealed something unexpected, shotgun pellets covered up by body filler. The bullet ridden tank was sent to Dutchy’s Motorcycle painting, who repaired the tank and laid down the gloss black paint, wrapping the tank up in original gold GT80 graphics. To keep the clean look of the bike, the electrics of the bike have been reworked. The factory loom is gone, in it’s place a Sparck Moto harness, eliminating any superfluous wiring. At the rear of the frame the custom electronics tray features a battery eliminator, as well as the relocated ignition switch. Up on the Posh low rise bars, the factory switch blocks have been swapped out for Posh mini switches, and a smaller Daytona unit takes over speedo duties. To keep the bike reliable, and due to the low kilometres it has travelled, Matt from SSC deemed the powerplant to be fine as is. To fit in with the aesthetics of the bike, the engine has been given a wrinkle black treatment, stainless casing bolts and the cases professionally polished. In terms of performance, the bike has had a slight touch up, the exhaust system features a Goods stainless header, punching the noise through the Cone Engineering muffler. In order to allow for the more free flowing exhaust, the carbs have been rejetted and fitted up with K & N pod filters. By completely reworking the aesthetics of the bike, but leaving the powerplant untouched, the Salty Speed Co crew has built a sweet ride, that is reliable enough to take further than the local coffee shop. With a slammed stance, gold highlights and fat rubber, we can easily see why the customer left the finer details up to Matt from SSC. You just gotta have a little faith.