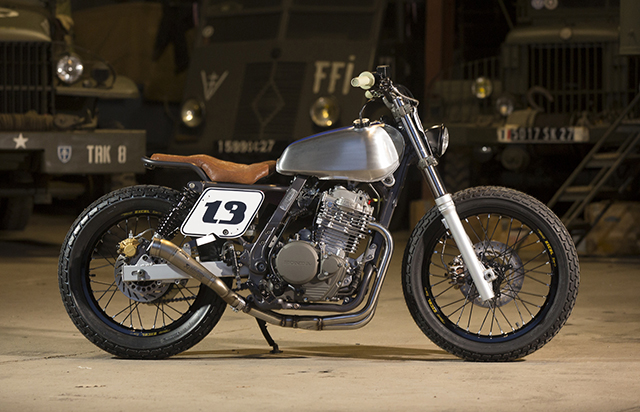 When you think of a dual-sport motorcycle, the first things that comes to mind are the Dakar rally bikes and more recently the BMW GS series ridden by actor’s Ewan McGregor and Charley Boorman used on their world famous rides around the globe. What doesn’t come to mind is a handcrafted, urban assault style, custom brawler straight out of a small village in Normandy, France. But that is exactly what builder Simon Garcia has created, taking a Honda NX650 Dominator and making it his own. Having worked for Honda in the past it made sense for Simon to select a bike from their stable from which to fashion his custom creation. Leaving aside the usual selection of CB’s, he sourced himself a 1989 NX650 Dominator with only one small problem, it had been sitting for 13 years after the engine had suffered catastrophic failure. The 650cc single was torn down and rebuilt with no stone left unturned, new crank, new piston, valves, and cylinder head. Just to make sure nothing was left to chance Simon also  rewired the entire bike. With it now running like it should, Simon’s dislike of plastics and the factory lines took over and anything that would normally be seen on a dual-sport was sent to motorcycle heaven. Looking for a fuel tank, Simon jumped on Ebay and across the Channel in the UK he found a one owner – two large dings included – XT500 aluminium tank.  Putting his metal work skills to the test he first took care of the damage that wouldn’t be hidden by paint and then modified the tank to fit the Honda frame. Knowing the look he wanted and with a self-confessed “overactive imagination” Simon was adamant the rear end was not to his liking. Wanting the classic look he set about design and building a rear sub-frame that looked the part and would hold a more traditional looking twin shock rear. But that imagination had to be satisfied, so no less than 11 different rear frames were fabricated and removed before Simon was completely happy with his handiwork. To match the new rear end, the front forks have been modified to lower the overall ride height and improve the handling. While Excel rims greatly reduce the unsprung weight and wrapped in Dunlop K180’s sourced from the USA ensure the NX is glued to the road. Renthal bars now control the Dunlop rubber, with new switch blocks and a small single headlight fitted to light the way home.  Simon custom made the stainless steel exhaust system from scratch and topped it off with a first class Akrapovic pipe that once called a Hornet 600 home. Now requiring somewhere to sit Simon reworked the custom pan and even utilised the original seat foam, cutting, sanding and shaping till he had achieved the desired look. The genuine cow hide leather sewn over the foam by a professional saddler remains the only work not carried out on the bike by Simon himself. To finish the look before final assembly took place the frame was coated in anthracite grey satin and the tank given the three colour Honda RC30 treatment. Simon now calls Sydney, Australia home and the bike was finished just 3 hours before he left France while the photos were taken the night he boarded a flight to start his new life Down Under. Now firmly entrenched in the Australian way of life, Simon is determined to build more bikes that reflect his new laid back outlook on life, but never forgetting the elegant vintage spirit that first inspired him. It’s fair to say his exceptional custom Honda NX650 is a testament to both old and new – Oh oui, c’est parfait!