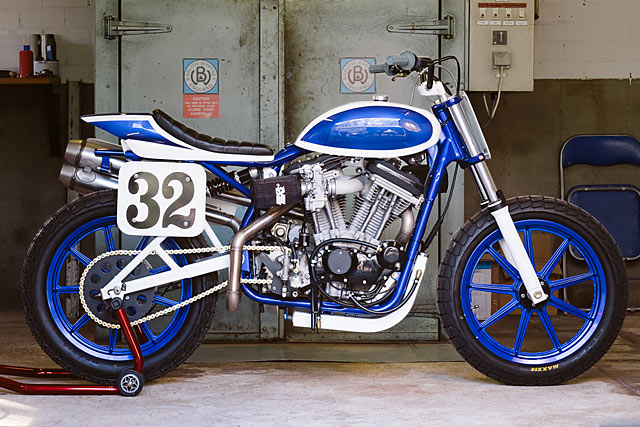 Harley’s original XR750s are the stuff of legend. With a winning streak that started in 1972 and is still being felt in flat tracking today, many argue that it’s the world’s most winningest motorcycle. Which is a pretty amazing claim to fame, when you think about it. The Netherland’s Bart Verstijnen knew he could build his own XR750 if he really put his mind to it. And once you see the twin Mikuni’s, you know this isn’t just a tepid homage. Oh no. This is the real deal. “Motorcycles have been in my life for the better part of 25 years,” says Bart. “I can’t remember doing anything I liked more than being surrounded by bikes. Then about 7 years ago, I got my road license. At that point, I also made the transition to roadbikes, and because I had been restoring 80’s ATVs before I wanted to get involved in building two-wheelers. So over the last couple of years I built some bikes, finishing one about every 2 years.”

After deciding to do a Harley, Bart saw the tracker XR750s and decided he wanted to put a front head on the rear cylinder, but after trying the idea out he noticed the pushrods didn’t line up at all. “Then I came across a picture of a bike Jared Mees had run in the AMA pro series; they had swapped the intake and exhaust on a rear XR head. This meant that one carb would be on the left side next to the front cylinder, and that’s what inspired me. I was just determined to get those 2 Mikuni TM40 carbs on there.” [superquote]“Now that it’s finished though, it turns out that the 1200 engine is a bit scary when provoked.”[/superquote]

“I had to pick the donor bike up from a small shop up north, about 180 kilometres (110 miles) from where I live,” says Bart. It started life as a 1990 sportster 883, but it had been upgraded to 1200cc cylinders. He was determined to get a 1200 because he had ridden an 883 on the road before and said it felt a little slow. “Now that it’s finished though, it turns out that the 1200 engine is a bit scary when provoked.” “I knew I wanted to do a flat tracker and it had to be candy blue and white. Because a flat track needs 19″ wheels, I bought a set of cast aluminium 9 spokers, and shot them with the candy blue just to see what it would looked like.” It turned out exactly the way he had hoped, and the hunt for the rest of the bike was on.

“When I got it home, I put it on the lift and took off everything until I had just the frame, swingarm and the motor left. The rest of the parts were sold to fund the project. Then I put the wheels I had powder coated roughly in place to kinda get a feel for things and to measure up some of the parts I would have to make.” He then got some forks from a Honda CBR1100XX, and the two Mikuni carbs came from Germany. “I made an A-frame for the swingarm, and a mounting point for the rear shock in line with the backbone. Around this time I found out the whole front head on the rear cylinder thing wasn’t going to work, so I sent the stock heads off to have the intakes milled down a little to create some room. During the milling process we went through the underside of the valve cover, so now bolting on the intakes was out of the question.”

“A week before this I had contacted Marcel van der Stelt, a great metal worker in the Dutch cafe racer and motorcycle scene, to discuss making a tank and other parts for my bike. He ended up welding the intakes straight onto my heads, and he also made my fuel tank, oil tank, number plates and he welded the exhaust.”

Then Bart took the whole she-bang apart, powder coated the frame, triples, lower forks, number plate holder and engine cases. He had it done and running on February 5th, just in time to enter it into ‘Motorbeurs Utrecht’, Hollands biggest motorcycle expo. We’re happy to say that it took first place in the Srambler & Tracker class. Bart says that the hardest part by far was welding the intake manifolds to the heads. When he tacked the first one on to determine its position, the welds were cracking as soon as they started to cool. “So we tried heating them up before welding, but this yielded exactly the same result. I thought I was screwed, but Marcel had a box of replacement aluminum welding rods with some different additives. We tried them while holding our breath, and thankfully they did the trick.” Bart’s shopping list included front and rear Maxxis DTR1 rubber, some Honda CRF450 levers, a Yamaha MT-01 rear brake caliper with a 260mm disc and some Dyna-S ignition gear. So after all the work and new bits, how does Bart feel about the bike? “I love it. My favourite part is the fact that it runs on the dual carbs, and it’s pretty much the closest I can get to owning a real Harley XR750 without spending $50,000.”