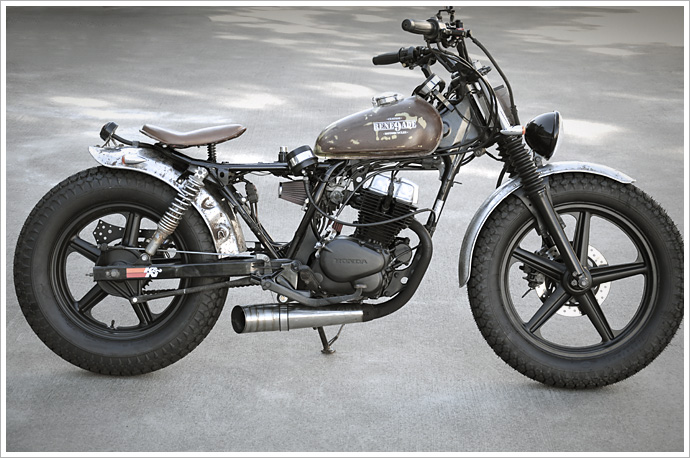 So, by now you’ll all know about Throttle Roll, and if you’re in Sydney next weekend you’d be crazy not to come along and join in the fun. But maybe you are crazy – crazy enough to ask ‘why?’ Well here’s exhibit A in your mental health review. It’s a unique take on a late model Honda CB250 from Rene9ade Custom Motorcycles, and it along with more than 40 other killer builds will be making an appearance at the show. Ren de Haas is the boss and ‘Chief Awsomiser’ at Rene9ade. We spoke to him about his latest build. “The bike is a ’92 CB250 twin. Internally, it’s very ordinary and nothing much has been changed with power delivery or drive train. The bike was in a pretty rugged state on delivery, but it ran so it ticked all the boxes. Then we got to work.” “The client was my long time upholsterer and one of the best fabric guys in the industry. He had this bike for years and decided on actually doing something.” Ren collected it thinking he was just fitting a longer clutch and accelerator cable, but he chatted with the customer and within minutes a new custom build was commissioned. “He had a tank and a seat already. Other than that, I was given full artistic license.” “He told me I could do whatever I thought would look cool – as long as it was minimal, raw and a little rugged.” Ren mentioned some ‘ratting out’ would be cool, and he was duly given the thumbs up.

A lot of time went into making this thing look at ‘crappy’ as it does. “I wanted it to look old and ratty, but also on a second look, like it was not an old bike at all,” Ren states. “I am pretty sure we achieved this. It has a mix of old and new parts, lots of aged bike bits, some modern Dan Moto gizmos, and plenty of use for old welsh plugs here and there.” “The frame was shortened, a plate fabricated up and fitted, custom seat mount, gauge mounts – the side-slung tacho is something love. A lot of wiring, welding and painting. And some messing around with acid to get the darn thing to rust up the way I wanted. Overall this was one fun build, my partner Mick and I had a ball creating this one-off piece and would love to take the rat look to the next level on a future build.” If you’re take by Ren’s work, it’s not exactly hard to catch the guy. See, as of right now Rene9ade has shops in Sydney, Melbourne, Perth and Jakarta. Drop by one of his shops and say hi, or better yet, why not catch up with him at the show?