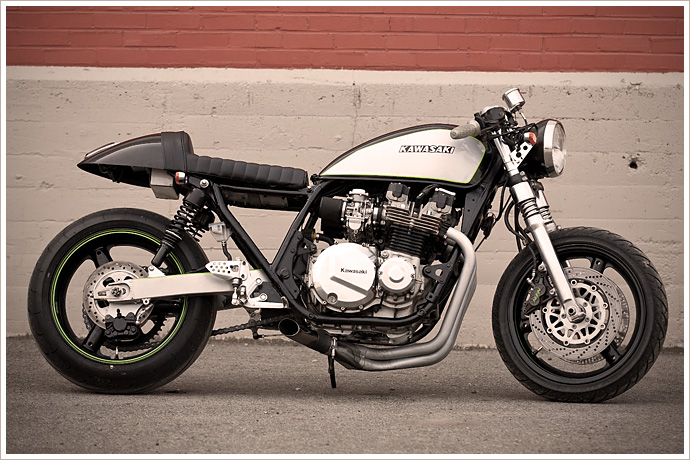 Albert “The Chief” Hurt comes from a long line of automobile mechanics. His grandfather, father and all his uncles worked as mechanics in the family shop. At the age of 12, Albert earnt his pocket money by sweeping the shop floor. “After I had worked there six months I was able to scrape up enough money for my first street bike, a 1972 Yamaha DT1 250,” he says. There have been many bikes since then, but it took a marriage breaking down and being diagnosed with stage 3 cancer to really motivate Albert to build his dream bike. “I have found a passion that I always had,” he says. After surviving his battle with cancer, Albert decided to build the ‘ultimate cafe racer.’ So he got to work and managed to find the perfect donor bike, a beat up old KZ1000 in El Paso, Texas. After 7 months of wrenching, including many nights in his garage during winter he has finally finished. We’re pleased to introduce you to Silver Bullit Cafe’s KZ1000. We’ll pass you over to Albert to explain the project in more detail. “After all the expenditures for parts, bike and the normal monthly bills there was just no money for a heater in the shop. As it turned out, it was not a very cold winter but I did spend some time in the shop in the teens. I felt like a one of the kids out of a Charles Dickens classic – all bundled up with finger less gloves on. Wrenching to my hearts content or until I froze my ass off, which ever came first. Usually the cold won.” “Since I was building a Cafe Racer I wanted to get rid of the stock suspension. I came across a 1995 Suzuki RF900R which was being parted out so the logical step was to install sport bike suspension on the beastie. The rear swing arm need a little shimming and I had aluminum shock tabs welded on to give it the old school look.  This was a mono shock swing arm so I cut off the mount, grinded it down and sanded it flush so you would never know it was there. After a couple coats of silver and satin black, I added the Kawasaki Green Pin striping to give it some bling. The shocks are from Benji’s Cafe Racer’s.” “I tried to keep the muscular look of the KZ1000 double overhead cam engine. I went with a black and silver theme through-out the bike so I figured the engine should get the same treatment. Black cylinder followed by a silver head and black rocker cover. The carbs got the same treatment, polished and then added the black Uni filters from TC Bro’s Choppers. The silver header paint is VH1 but not so sure I like the paint; it’s very easy to scratch and you notice every little piece of dirt on it.” “I wanted to have the ability to properly stop the beastie. The brakes have more than enough power to bring the KZ1000 to a halt in short order. I have some new stainless brake lines from Galfin ready to install. The bike is very low with the Suzuki suspension. The tire and rim in front are a 16″ while the rear is a ZR1 17″ fattie. The Kawasaki green striping on the tank and wheels off set the black. The controls are a combination of aftermarket parts from Drag Specialties, Dime City and KZ1000.

And finally the engine specs: Inline four, 999cc, DOHC, Stock Horsepower 95, Mikuni Carbs, Uni Pod Filters, Ape Air Block Off Plates, 5 speed Transmission, 1 down 4 up. Wet Clutch, Kerker four into one Header, Moto GP 8″ Muffler. Top speed you ask? Whatever you’ve got the balls to do. I know it will do the ton.” It’s been six years now and Albert is still cancer free and he has already built six bikes this year. It’s proof that great things can come out of bad situations. Not only does Albert have this beautiful KZ1000, he has also found a new lady in his life – we couldn’t have written a better ending. “To all cancer survivors this bike build is for you and your caretakers. Fight the good fight and hang in there; never give up,” he says.

For the complete story visit the Silver Bullit blog or to hire Alberts wrenching skills visit the shop site.