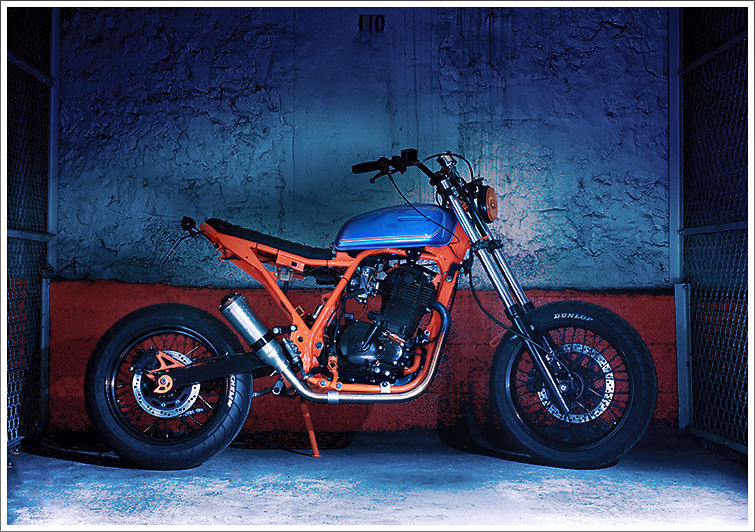 The French always seem to be on the forefront of fashion. Clothes, perfume, and now custom motorcycles. Not that I pay much attention to the first two. The latest fashion in custom cycles appears to be to use a dirt bike as the base for a build. Rugged, simple design makes for an excellent platform to build on, they’re cheap as well, and the ability to get that big bore thumper note all add to the desirability. Blitz Motorcycles knows this, and has used this thinking to the best of their abilities to create a level of custom rarely seen, all from the starting point of a simple trail bike. It just makes sense, oui?

Taking a 1994 Suzuki DR650, the bike was completely stripped down, and the frame shortened by 35cm. Added to the frame at this time was the electrical box, somewhere to keep all the important bits that make the bike spark, and all without adding bulk to the aesthetic. The frame was then powder coated in shiny orange, along with a few engine and brake components. This is what really shows the theme of the colour scheme, which Blitz describes as “Lemans GT40 on acid”. Deciding that with a new final weight of 125kg, the 4 valve powerplant was up to the task of motivating the DR without any fettling. It was opened up and examined, mainly due to the fact that the engine hadn’t turned over for 10 years, and even then the only components replaced were the clutch plates. On the intake side of things, a K&N pod has been fitted, the standard Suzuki carb rejetted to suit the aftermarket air filter. The exhaust is a 100% stainless steel handcrafted system, topped off with a Supertrapp alloy muffler. Blitz decided on the standard 18 inch at the front, 17 inch at the rear wheels, but fitted a new monoshock to help with handling. Steering is done with a set of vintage Triumph handlebars, sitting just above a Marchal headlight from a vintage rally car. To offset the searing effect the frame has on the retinas, a healthy dose of black powdercoat has been added to the wheels, forks, swingarm and other parts dotted around the bike. The overall look of the bike is ‘anorexic motard’, where less is more, and this shows in the Suzuki GT125 fuel tank fitted, as well as the simplified electrical wiring harness. This lightness pays off though, as Blitz describes that the bike “runs like a bullet, and roars like a dragon”. It’s simplicity, thumper sound and ability to modified is what made it desirable for the build, and by dropping their usual staple of pipewrap and firestones, Blitz have shown that they can build a bike where function and fashion can coexist – and don’t it look like a hell of a lotta fun?