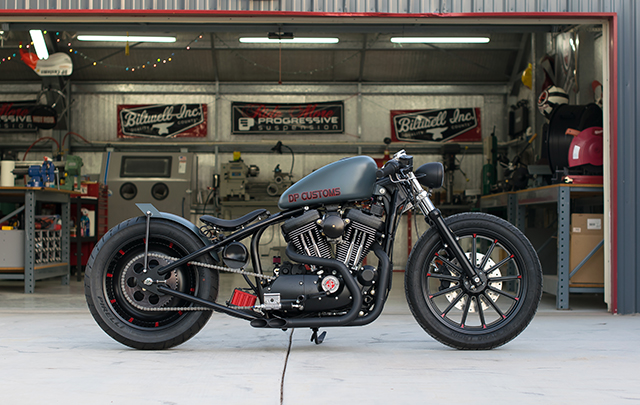 The two brothers who own and run DP Customs think themselves lucky to have forgone the politics and paperwork of larger workshops. Instead of having to follow someone else’s vision for a bike, Justin and Jarrod Del Prado spend their days building what they simply describe as ‘great bikes for great people’. And in between refining their pit-master BBQ skills, beer drinking sessions in the hot Arizona sun and trips to go storm chasing they’ve produced this simple, clean 2001 Harley Davidson Sportster bobber dubbed the ‘ZZ’. The brothers had planned to DP the bike after being approached by a fan. “We built this bike for a customer that had seen some of our previous hardtail bikes with clip-ons,” they say. “He loved the lean and clean style of our bikes and wanted something similar.” Unlike some of their previous builds, which feature Öhlins suspension and carefully-worked steering geometry, this customer had a riding style closer to what Harley Davidson originally intended. “He lives in an area with a dry climate with lots of super smooth roads,” they say. “And this bike will be perfect for his weekend blasts.” The first thing the brothers Del Prado did was some engine work. The big 1200cc V-twin was rebuilt and the CV carburettor given a freshen up with some new jets while a Joker Machine air intake allowed the bike to inhale more easily. A new exhaust was also fitted, light weight and loud with the pipes being ceramic coated black to match the powder coated rocker boxes, cam cover and primary cover. Spark was intensified with a Dynatek single fire ignition and coil, running into a loom that was assembled from scratch. But the engine doesn’t really take centre stage on this build, with the frame work really being the central point. The original twin shock frame was stretched 4 inches and features a 4” drop hard tail rear end. The wheels were swapped out too, with an Iron 883 19” front and a 17” rear wheel mounted with the excellent Pirelli Night Dragon tyres. Stopping power is provided by Brembo, the patron saint of motorcycle braking, while the standard 1 inch handlebars and mid-set controls being replaced by clip-ons and aluminium foot pegs, both courtesy of Chainsikle. What I like most about DP’s bikes is their paint schemes, often drawn from famous race cars from the 70’s and 80’s, with their John Player Special Lotus build being a personal favourite of mine. This time around the brothers had the tank and fender (complete with rear spoiler) sent to Walkers Way Custom Paint in Mesa where it was finished in battleship grey with black and red accents. Painted in a matte clear finish, the bike was haze grey and underway. I have to admit that I was a Harleysceptic™ for many years, being a typical Japanese bike rider who turned up my nose at the marque without having ridden one. And I mean a proper one – I’d ridden a choked-up 883 Sportster and it’d left me completely cold and had gone on to dismiss all their bikes out of hand. But one late afternoon I was the only one sober enough to move a hard tailed 1200cc Sportster from a friend’s front yard to the back of his house. An hour later I found myself laughing manically, still on the bike fifty postcodes away. In one afternoon I ‘got it’. But I digress. Bikes like DP’s Sportster manage to take the best of the HD range, and strip it of weight, clean up its lines and get it set for long, low runs along the Arizona landscape. They’re going to have one very happy customer.