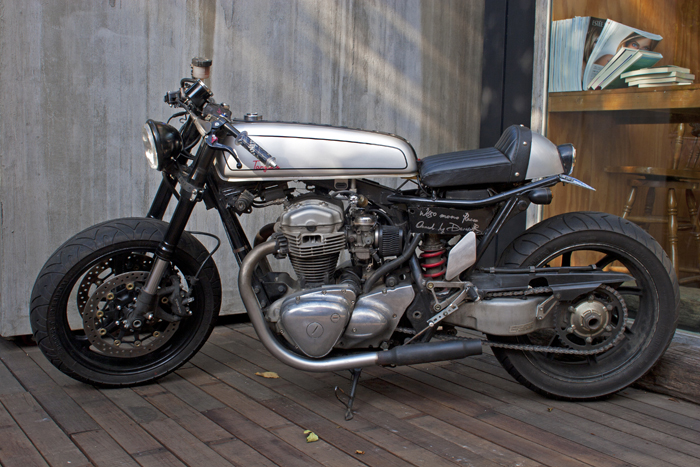 Anyone who has visited our fair city of Sydney in the last 20 years will have probably had the dubious pleasure of riding on our mass transit system. Known as CityRail by it’s employees and ShittyRail by the rest of us, it’s main train is the once shiny but now fairly lack-luster ‘Tangara‘, which is an Australian Aboriginal word meaning to go. Which they do, sometimes. Put simply, the trains are old, well-used work horses that are a little dangerous, fairly dirty, jury-rigged and manned by a bunch of nasty-looking guys who aren’t that accustomed to being helpful or courteous. Which brings us to Seoul’s Denver Cho and his well-used, dangerous, dirty, jury-rigged W650 “Tangara” Kwaka – which is more often than not manned by his good self, and by the look of him he’s probably not that good at being courteous either. Labelled for ease of use

We’ll let Denver take it from here. “‘Tangara’ is the name of the silver trains that run in Sydney, Australia. I named my W650 mono racer as ‘Tangara’ according to my memories of them back in the 90’s. My name is Denver Cho currently living in Seoul Korea – I’m the lead singer in a band called “Mongoliam Project” and an owner of a bar called “Velvet 270”. “I purchased a 2001 W650 and I did not like it much because almost anyone could recognize it, and also it had shitty brakes. So I started with the styling first. There was a used Honda Dream 50 fuel tank and seat at ‘The Mechanic’ (a motorcycle shop owned by my friend). The only issue that concerned me was the size of the tank. I did not want to stop at petrol stations too often, however it seemed less of a problem after I made a 300km (186 m)  return trip – it was more economical than I thought.”

“After the styling was done I started searching for parts for performance tuning. It took me around 6 weeks to get the parts in my hand. The front forks were from another motorcycle shop in Seoul, front rim was brand new from Honda Korea, rear swing arm from Japan. Yahoo auction, rear rim was from junk yard… and so on.” What could possibly go wrong?

“It is always fun to modify something… unless you face a huge problem. For my lady the rear shock was the problem. There was no room between the swing arm and the frame. Shock could be placed somehow but it won’t be operating properly. I had a chat with my welder and decided to chop part of the main frame which goes vertically down between the tank and the seat. The chopped part was replaced with a hard steel plate, so we could make it more roomy. Shock is a little stiff – I’m thinking it might be a geometrical problem.” Following his mother’s advice, Denver wrote his name on his favourite toy so he didn’t lose it

“It took about 3 months to bring her home. She is loud, pretty, uncomfortable and unique. I am planning to lower the seat little bit to obtain a better riding position.” Being Tangara regulars, we’re glad to see Denver didn’t take ALL the aspects of the Train and use them. For instance it’s great to see that there’s no stale urine on the bike. Or sleeping drunks. Or rampaging teenagers heavy petting and/or knife fighting while it’s between stops. And the lack of vomit on the seat is also an inspired choice in our eyes.

But all jokes aside, we’re seriously impressed by the genre-defying bike Denver has managed to create here. It’s equal parts rat, sports bike, cafe and naked that somehow holds together perfectly AND looks damn mean in the process. Most of us would be hard-pressed to pull off just one of those genres, let alone four of them. Nice work.