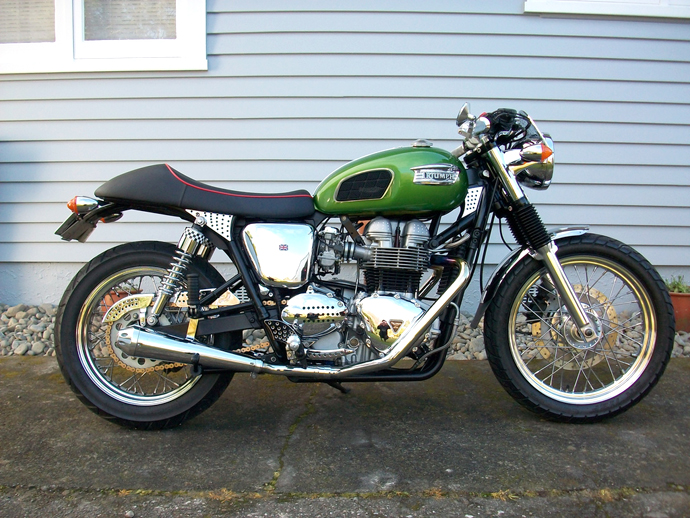 It always amazes me what people can create in their home garages. People like Lee from New Zealand who has been modifying bikes for many years and fabricates all the alloy parts on his little lathe. “I have butchered most makes and models to the horror of the purists” jokes Lee. He bought this Bonnie new back in 2001 and started modifying it straight away. “The first thing I made were the Ace bars” Lee says. “Then I spun up the grips, pegs, mirror and side cover screws on my Myford lathe. Next I made up the tail light bracket and cut down and chromed the front guard. I removed the front forks and cut the mudguard mounts off them and polished them by hand. I cut frame infills out of alloy plate and drilled holes in everything I could, then got it all chromed.” The rear shocks are Koni’s that are made to fit a Harley Dynaglide with the eyes drilled out. Lee made the pipes out of a box of bends, gas welded them together and then hand filed off the welds. The muffler end caps were also spun up out of billet alloy and then the tank had some cosmetic surgery. “The original gas tank always annoyed the hell out of me with that ugly lip all the way around, so I cut the lip off and gas welded the thing back together” says Lee. He is right, the tank looks so much cleaner with that ‘ugly lip’ removed.

As you can tell by looking at this beautiful Bonnie, Lee loves drilling more than BP does. “My wife has concerns about my hole drilling fetish” he says. Lee has almost finished another project, a Suzuki Bandit 1200 Streetfighter which shows his latest fetish… alloy spikes.