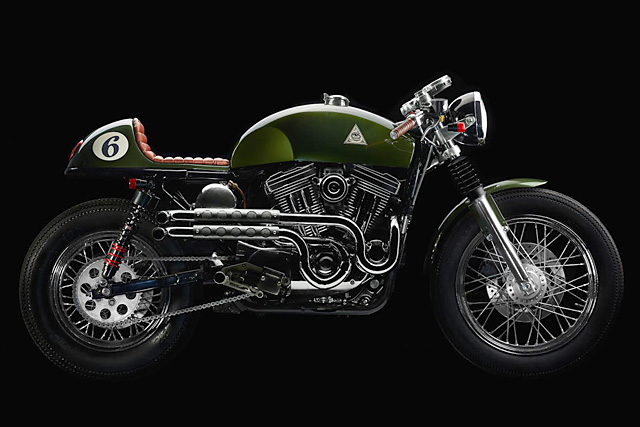 China is a funny country in a not so funny way. While most countries generally think motorcycles are a viable way to cut traffic congestion and reduce pollution in cities, the Chinese are going the other way. They have started to ban motorcycles in major cities like Beijing and Shanghai (plus another 200 cities across the country). These strict laws by the government are having a huge impact on bike manufacturers like Harley-Davidson who thought the new found wealth of the Chinese would make it an easy market to increase their sales. How wrong they were. There are however a number of small custom shops who are defying logic and opening custom garages because it’s what they love doing. One of these is a freshly opened shop called Mandrill in Beijing. Mandrill is the love child of Lin and a few of his like minded friends, who are determined to keep the motorcycle culture alive and have a place that bike enthusiasts can hang out. Their first build is this compact Harley Sportster café racer which has been built over the last couple of years and given the name ‘Red-Eye Bitch’ because of the many late nights it took to build her in their spare time – they all still have day jobs to pay the bills. The story starts a couple of years ago when Lin found a 2003 Sportster frame and engine that was for sale by a friend. Being quite rare in China he decided to snap it up and then went about trying to find other parts to complete the build. Another Chinese law that doesn’t make it easy buying parts for an ‘older bike’ is that if a motorcycle has been on the road for longer than 11 years then it has to be scrapped.  Of course, you can buy collectable bikes, but you just can’t ride them on the streets. Lin started by ditching the stock tank and purchasing a curved whale tank from Benjie at BCR. Mandrill then went about fabricating that stunning custom exhaust which flows seamlessly from the front to the back. Mandrill made some modifications to the frame and made the proportions even more sporty. Lin also replaced the bulky stock battery with a much more subtle lithium battery. They also upgraded the bike with some custom rear sets and hand made oil tank. To finish the build off, Lin’s friend Tang painted the bike in green with racing stripe and number. The guys at Mandrill are so happy with the way this Harley turned out. We love their commitment building these bikes when they know they are fighting an uphill battle with a government hell bent on eradicating motorcycles. We are told that to buy a motorcycle licence (A-Licence) that lets you ride in the CBD now costs $15,000. That’s a lot more than most people spend on their bike. Would you ride a motorcycle if your licence cost more than your machine?